1 dead, 4 injured in clashes between TDP, YSRCP workers in Andhra

The police have registered an FIR under Sections 302 and 307 of Indian Penal Code (IPC). 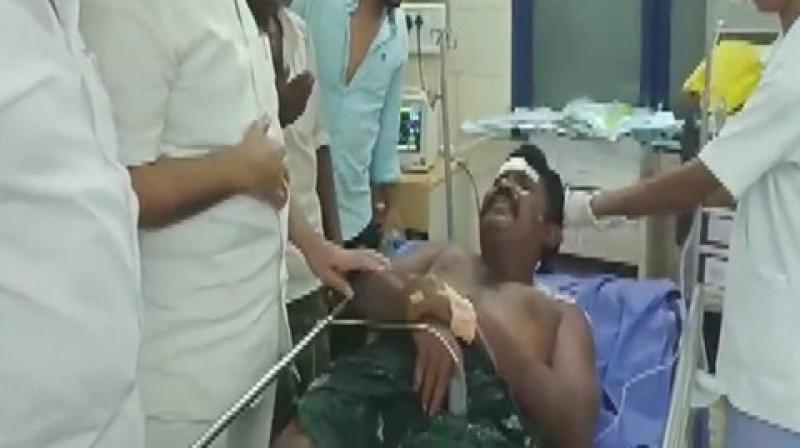 They were taken to RDT Hospital in Bathalapalli. Further investigation is currently on. (Photo: ANI)

Anantapuram: One dead and four others got injured in clashes between YSRCP and TDP workers in Bathalapalli Mandal in Andhra Pradesh's Anantapur district on Saturday.

"In Patyapuram village almost everyone belongs to the same community. However, while most of them are supporters of YSRCP, a few are supporters of TDP. An Anganwadi building was sanctioned to the village during TDP regime and a small wall was constructed. But there was a dispute over the ownership of the land. Due to that, the construction was stopped for more than one and a half years," said Dharmavaram Rural CI.

"Gangappa, who claims the title of the land, yesterday tried to remove the wall along with some of his friends. Rajappa, who is a supporter of TDP, tried to prevent them. Son of Gangappa named Chinna Rayudu hit Rajappa with a sickle on the head. That led to clashes between both the factions," the official added.
He went on to add that "Rajappa died in the clashes, while four others are injured."

"They were taken to RDT Hospital in Bathalapalli. As the position of two was critical, they were shifted to Savera Hospital in Anantapuram. Now they are out of danger. The police have registered an FIR under Sections 302 and 307 of Indian Penal Code (IPC). Further investigation is currently on," the official stated.