Javadekar also holds the additional charge of Minister of Information and Broadcasting. 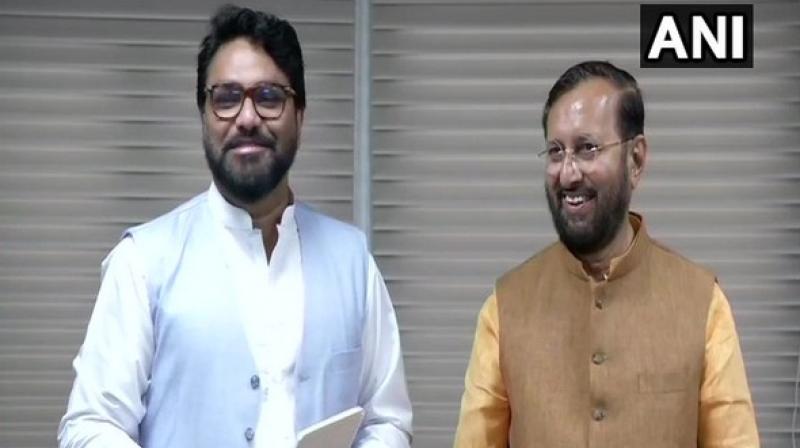 'I am looking forward to working with him (Javadekar). I thank the Prime Minister for giving an opportunity to me,' singer turned politician Babul Supriyo said. (Photo: ANI)

New Delhi: Prakash Javadekar on Saturday took charge as the Minister of Environment, Forest and Climate Change and said that he would continue to push Prime Minister Narendra Modi's vision of addressing climate change and other issues.

Speaking to the media after taking charge, Javadekar said, "I always believe that nature's five elements are water, air, fire, earth and sky. The mandate of this ministry is to protect all these elements. In the last five years, both environmental protection and progress has been made possible and that will be our guiding principle."

Underlining that India played a key role in facilitating the Paris Climate Agreement in 2015, Javadekar said, "Prime Minister Modi has a special and keen interest in environment, forest and climate change. He has a vision for this. Modi Ji facilitated the Paris Agreement and he introduced lifestyle and climate change for addressing the issues."

Javadekar also holds the additional charge of Minister of Information and Broadcasting. He took charge of the ministry on Friday.

Singer-turned-politician Babul Supriyo also took charge as the Minister of State in the Ministry.

"I am looking forward to working with him (Javadekar). I thank the Prime Minister for giving an opportunity to me," he said.

In the first Modi ministry, Javadekar served as the Environment Minister from 2014 to 2016, before he was shifted to the Ministry of Human Resource Development for the next three years.