Rajya Sabha on Monday took up the bill whose passage requires two-third majority of those present and voting in the 245-member House. 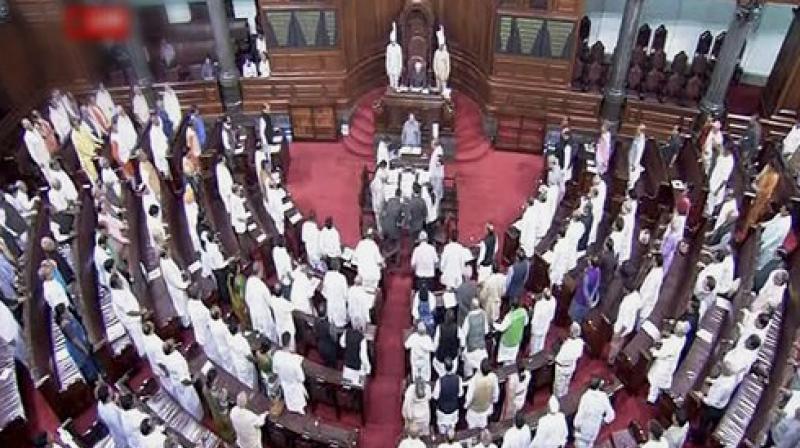 The amendments were passed by 74 to 52 votes, causing an embarrassment for the NDA which has a strength of 89, if JD(U)’s 10 members are also counted. (Photo: PTI)

New Delhi: In a major embarrassment for the Narendra Modi government in Rajya Sabha, an amendment moved by Opposition Congress to Constitution 123rd Amendment Bill, 2017, granting constitutional status to the OBC commission was passed because of low strength of ruling NDA MPs in the House.

Constitution (123rd Amendment) Bill, 2017, providing for the set-up of National Commission for Backward Classes, was passed after dropping Clause 3 to which four amendments had been approved by the House earlier.

The dropped clause pertains to the insertion of a new Article 338B in Constitution regarding the powers of National Commission for Backward Classes.

The amended bill will now have to be returned to Lok Sabha for fresh approval. Lower House had passed the bill but in Upper House, it was referred to a committee.

The Rajya Sabha on Monday took up the bill whose passage requires two-third majority of those present and voting in the 245-member House.

While the clauses of the bill were being put to vote, Congress members Digvijaya Singh, B.K. Hariprasad and Hussain Dalvai moved a number of amendments to Clause 3.

One amendment sought increase in the number of members of the proposed commission from three to five with reservation for a member from a minority community and for a woman. Another spoke about protecting rights of states by making the recommendations binding.

The amendments were passed by 74 to 52 votes, causing an embarrassment for the NDA which has a strength of 89, if JD(U)’s 10 members are also counted.

This led to a deadlock as the clause which was amended was required to be passed by a two-third majority of those present and voting. This meant that the both ruling and Opposition had to vote together. The government was not ready to accept the amendments.

However, since the amendments had already been passed, there was no going back, deputy chairman P.J. Kurien ruled.

Later, the bill was finally put to vote, dropping Clause 3 from it. It was passed by 124 to 0 votes, ending a drama of about 90 minutes.