The rally is being led by woman biker Raj Lakshmi, who arrived here with her team from Kanyakumari. 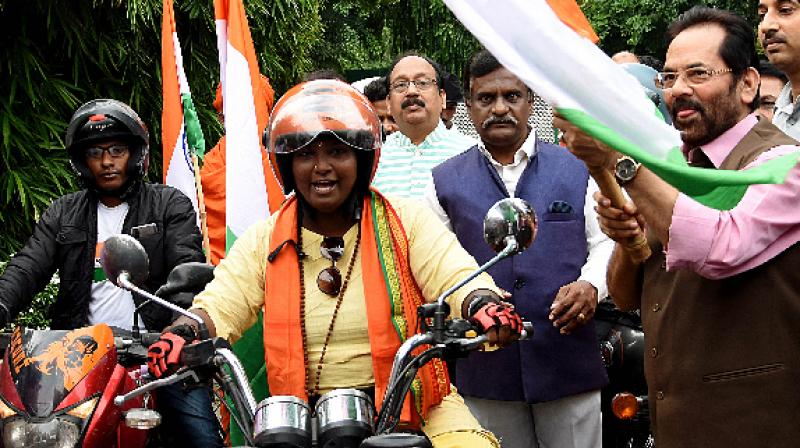 The ruling party has formed two teams to take out the party's message among the public on the issue. (Photo: ANI)

New Delhi: Union Minister Mukhtar Abbas Naqvi on Sunday flagged off a bike rally to Kashmir to celebrate the abrogation of Article 370 and spread the message of 'Ek Vidhan, Ek Samvidhan.'

The rally is being led by woman biker Raj Lakshmi, who arrived here with her team from Kanyakumari. The group will cover more than 5,000 km distance.

"This bike rally is to send the message of 'Ek Vidhan, Ek Samvidhan' (One Legislative, One Constitution) in all rural and urban areas. After the abrogation of Article 370, it is important to create awareness among masses about its positive results," said Naqvi.

"The bikers will apprise masses that the Indian flag will be hoisted in the region. It is an attempt to generate a feeling of nationalism. It is not politics. It is about the country," added Naqvi, speaking to media persons.

"The Kashmiri youths will surely get inspired by the rally. Revocation of Article 370 is a historic moment for all of us. There is a positive environment in Jammu and Kashmir and Ladakh," he said.

Talking about the campaign, Lakshmi said: "It is about the country. All should come forward together. We will spread the message of 'Ek Vidhan, Ek Samvidhan'. All bikers will carry Indian flags with them throughout the rally."

The kicking off 'Sampark Abhiyan' on Article 370 also coincides with a workshop to discuss the strategy of spreading public awareness and outreach programme regarding the repeal of Article 370 organised at the BJP headquarters here today.

All state units party presidents and members of different task forces formed for the purpose were present in the workshop.

The ruling party has formed two teams to take out the party's message among the public on the issue.

The teams are headed by Union Ministers Dharmendra Pradhan and Gajendra Singh Shekhawat. BJP working president JP Nadda was present in the workshop.