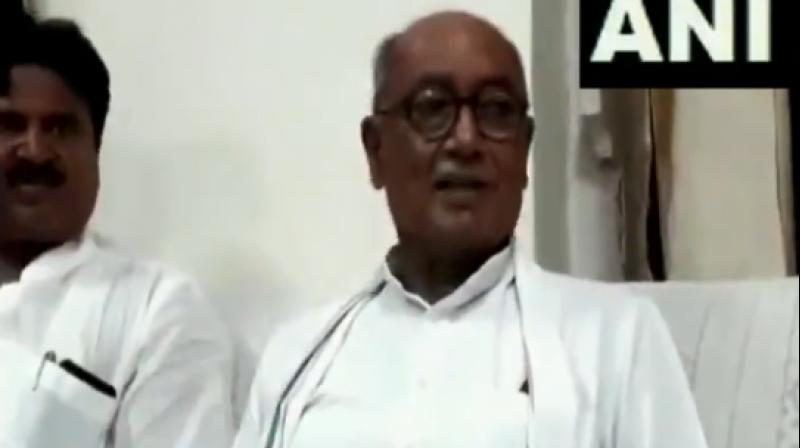 He also tweeted that Madhya Pradesh Police arrested functionaries of Bajrang Dal and BJP's IT cell for "spying" for Pakistan in return for money. (Photo: ANI | screengrab)

#WATCH MP: Congress leader Digvijaya Singh says, "Bajrang Dal, Bharatiya Janata Party (BJP) are taking money from ISI (Inter-Services Intelligence). Attention should be paid to this. Non-Muslims are spying for Pakistan's ISI more than Muslims. This should be understood." (31.08) pic.twitter.com/NPxltpaRZA

"Bajrang Dal and Bharatiya Janata Party are taking money from ISI. Pay attention to this," he told reporters here Saturday, and went on to claim, "Non-Muslims are spying for Pakistan's ISI more than Muslims. Mind this."

On Sunday, Singh, however, claimed some channels were telecasting "totally wrong" news about his statements. "Some channels are running that I have alleged that BJP takes money from ISI for spying for Pakistan. This is totally wrong," he tweeted.

He also tweeted that Madhya Pradesh Police arrested functionaries of Bajrang Dal and BJP's IT cell for "spying" for Pakistan in return for money. "I have levelled this allegation and I stand by it. Why don't channels ask this question to the BJP," he asked.

Reacting to Singh's claims, senior BJP leader Shivraj Singh Chouhan said the Congress leader has lost his credibility and intentionally resorts to making controversial statements. "The Sangh Parivar and BJP do not need a certificate of patriotism from anyone. The country and the world knows it. He intentionally gives controversial statements. He has lost credibility," Chouhan said.

One of them, the Congress alleged, was a Bajrang Dal member who was arrested for running a similar racket along with a BJP IT cell functionary in February 2017.