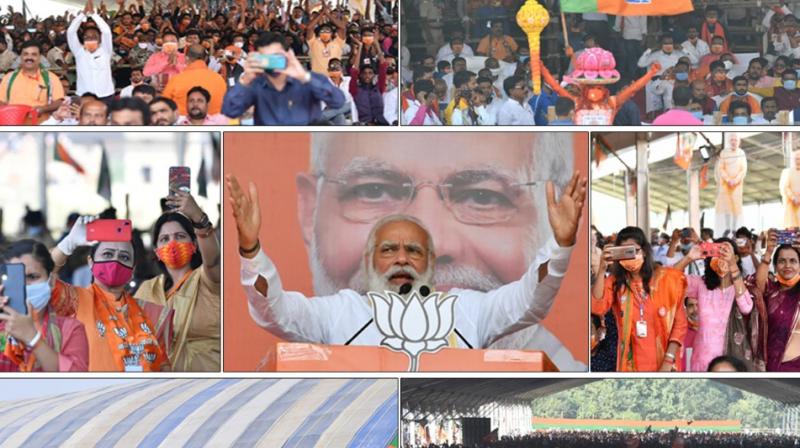 A collage of Modi's ralies posted by @BJP4India

Ahead of the second phase of polls due on November 3, Prime Minister Narendra Modi exuded confidence that the NDA in Bihar will return to power after the Assembly polls are over. He said this while addressing several public meetings in Chapra and Samastipur on Sunday. “The huge turnout in the first phase and all the surveys have proved the poll pundits wrong. Reports suggest that the NDA under the leadership of Nitish Kumar is returning to power after the Assembly elections,” Modi declared.

This was Prime Minister Modi’s third tour of Bihar for the ongoing Assembly elections. Besides Chapra and Samastipur, he also addressed public meetings in Motihari and Bagha. The PM’s visit to Chapra on the eve of the second phase is significant as it has been a stronghold of RJD supremo Lalu Prasad Yadav. Campaigning for the 94 seats in 17 districts that will go to the polls on Tuesday ended on Sunday evening.

While addressing his political rallies, Modi tore into the Opposition’s grand alliance chief ministerial candidate Tejashwi Yadav and Congress leader Rahul Gandhi, referring to them as “double yuvraj”, and saying that they are fighting against the “double engine government” in Bihar (BJP and JD-U) to save their thrones.

“The double engine government is working for the development of Bihar but the double yuvraj are fighting the election only to save their thrones,” Modi said.

Cautioning people to vote against the Opposition coalition in Bihar, he said, “There used to be double yuvraj during the UP elections also, but you saw what happened to them. These two are going to meet the same fate and you should be careful as one of the yuvraj has now joined hands with the yuvraj of jungle raj in Bihar”.

During his public meetings, he also reminded people of the “jungle raj” during the 1990s when the RJD was in power and said that several development projects were stuck for many years due to the policies of the previous government in Bihar.

Continuing his attack on the RJD, Mr Modi said that “earlier mothers used to get worried that their children would get kidnapped for ransom. I ask you whether you want the state to return in the same era”.

While making an indirect reference to the RJD and the Congress, he said that “out of frustration they are saying bad things about me. I don’t care what they have been saying against me, but I want to tell them not to show anger against the people of Bihar”.

The PM also launched a veiled attack on the Congress over its remarks on the Pulwama attack. He said that the Pakistanis had recently accepted their involvement in the attack, which exposed those who doubted the valour of the sons of Bihar. “You have to beware of such forces that can go against the national interest for their political gains”, Mr Modi said while addressing a rally in Chapra.

Invoking “Chhath Puja” in his public meetings to seek votes from the people of Bihar, especially women, he said: “Mothers should prepare for Chhath Puja without any worry because their son is there in Delhi. I assure you that we will take care of all your needs until Chhath Puja.”

He said that the Opposition only remembers the poor and needy during the elections but after the polls are over they turn their focus back on the welfare of their own families. He also referred to Sardar Vallabhbhai Patel during his speech and alleged that Congress leaders had failed to remember him on his birth anniversary on October 31.