Dismissing the claims of the BJP, NCP and Congress accused the party of being 'ungraceful losers' and running away from the Assembly. 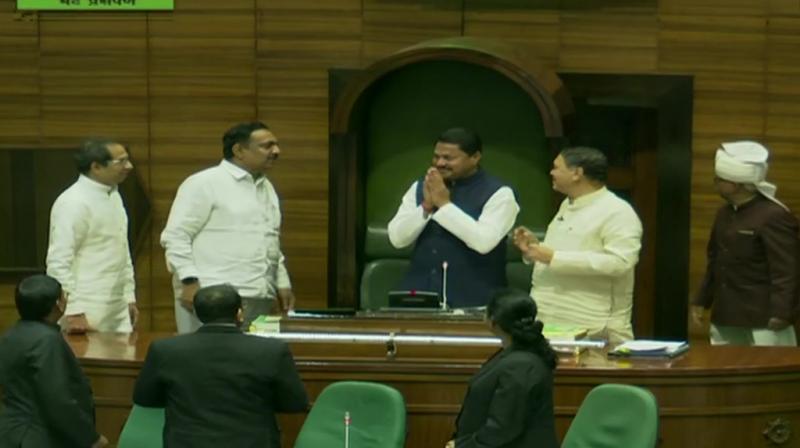 A day after Uddhav Thackeray-led Shiv Sena-NCP-Congress government sailed through the floor test amid protest by BJP, led by Devendra Fadnavis, the Maharashtra Assembly will vote at 11 am to elect its speaker on Sunday. (Photo: Twitter/ ANI)

Mumbai: Congress leader Nana Patole has been elected as the new Speaker of the Maharashtra Legislative Assembly after BJP candidate Kisan Kathore withdrew his nomination on Sunday.

Pro-tem speaker Dilip Walse Patil made the announcement after BJP candidate Kisan Kathore withdrew his nomination earlier in the day.

Chief Minister Uddhav Thackeray and some senior MLAs then escorted Patole to the Speaker's chair.

The Congress on Saturday announced party MLA Patole as the candidate of the ruling Shiv Sena-Congress-NCP alliance for the election to state Assembly Speaker's post, while the BJP named Kathore as its nominee.

Patole represents Sakoli Assembly segment in Vidarbha, while Kathore is from Murbad in Thane district. This is the fourth term as an MLA for both. The Uddhav Thackeray-led Maha Vikas Aghadi government passed the floor test in the state Assembly on Saturday.

Altogether 169 MLAs voted in favour of the motion of confidence after the BJP, which has 105 MLAs, staged a walkout before the head count began in the 288-member House.

On Saturday, the Uddhav Thackeray-led Shiv Sena-NCP-Congress government sailed through the floor test amid protest by BJP.

Fadnavis had staged a walkout from the Maharashtra assembly ahead of the floor test against the selection of Nationalist Congress Party's Dilip Walse Patil by the Maha Vikas Aghadi coalition government as temporary speaker who had replaced his party's Kalidas Kolambka.

The BJP had said it may approach the Supreme Court against the change of the temporary Speaker. "Such a replacement happened for the first time in the history of India as the Shiv Sena-NCP-Congress alliance was scared of losing the floor test," Fadnavis, who reigned as the Maharashtra chief minister earlier this week after NCP's Ajit Pawar withdrew support, said in the House.

"Business is being transacted in the House in violation of the Constitution. The session itself is not in line with the rules," Fadnavis told reporters on Saturday after the walkout.

Dismissing the claims of the BJP, NCP and Congress accused the party of being "ungraceful losers" and running away from the Assembly.

The NCP chief spokesperson Nawab Malik said Walse Patil was appointed as pro-tem Speaker with Governor Bhagat Singh Koshyari's consent. The session too was convened after Koshyari's approval, he said.