He is admitted to bail on furnishing bail bond in a sum of Rs 25,000 along with one sound surety in the like amount, the judge said 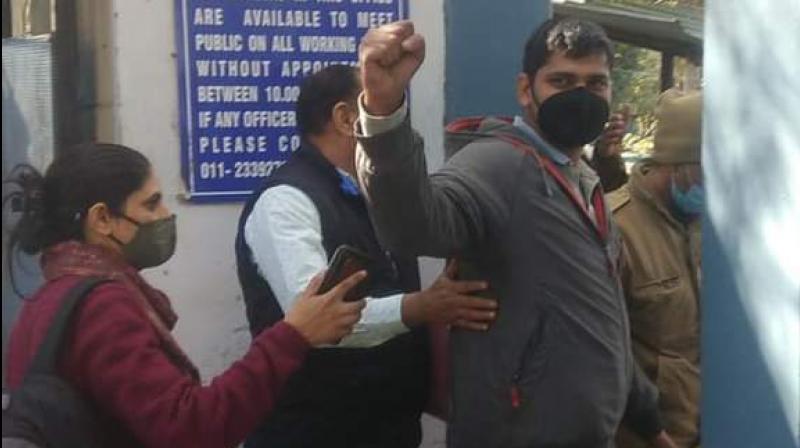 New Delhi: A Delhi court Tuesday granted bail to freelance journalist Mandeep Punia who was arrested by Delhi Police from farmers' protest site at Singhu border.
The complainant, victims and witnesses were police personnel only, "hence, there is no possibility that accused/ applicant can able to influence any of the police officials, Chief Metropolitan Magistrate Satvir Singh Lamba said while granting the bail.
Punia was arrested by police on Sunday in an FIR registered under various sections including 186 (Obstructing public servant in discharge of public functions), 353 (Assault or criminal force to deter public servant from discharge of his duty) and 332 (Voluntarily causing hurt to deter public servant from his duty) of IPC.
The judge also noted in the order that the alleged scuffle incident of case was of around 6.30 PM, however, the present FIR was registered at around 1.21 AM on the next day.
He further said, Admittedly, the accused is a freelance journalist. Moreso, no recovery is to be effected from the accused person and keeping the accused further in Judicial Custody would not serve any cogent purpose.
He said it was well settled legal principle of law that bail is a rule and jail is an exception.
Hence, considering the totality of facts and circumstances of the present case, submissions on behalf of both the parties as well as keeping in view the period of detention of the accused in judicial custody, he is admitted to bail on furnishing bail bond in a sum of Rs 25,000 along with one sound surety in the like amount, the judge said.
The court also imposed various conditions on the accused, including that he will not leave the country without its prior permission.
Accused shall not indulge into similar offence or any other offence in the event of release on bail. Accused shall not tamper with the evidences in any manner, it said.
It further directed that the accused shall join the investigations as and when required by the investigating agency.
Punia has told the court that he was innocent and was falsely implicated in the case.
The offences as alleged in the present FIR are not made out against the accused. The accused is a freelance journalist and was carrying out his duties along with another journalists at the protest site of Singhu Border, Delhi, his lawyer had told the court on Monday.
It was further contended that another journalist was also apprehended by the police, but was released in the mid night.
However, the accused was not released as he was not carrying any press ID card. Accused is a freelance journalist and used to write the articles and is a frequent contributor to the Caravan magazine, the counsel said.
He further said that accused had roots in the society and that he will co-operate in the investigation, as per law.
Delhi police had opposed the bail application on the ground that the allegations against Punia were grave and serious in nature.
It said that the accused may again indulge in instigating the protestors and may create nuisance at the protest site with the group of different people and may hamper the investigation.
Punia was sent to 14-day judicial custody on Sunday.