Mukhtar Ansari's shooter son aims at double target in UP

Abbas, who is making his debut in the elections, will be the youngest legislatior at the UP Vidhan Bhawanif he wins. 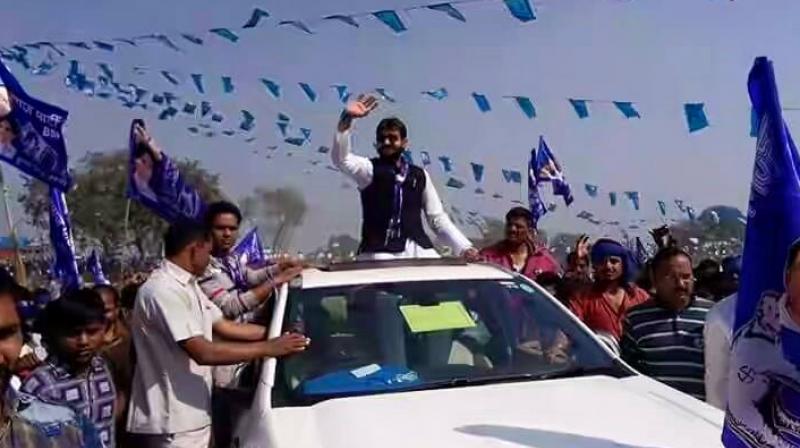 Ghosi: An ace shooter and son of jailed don Mukhtar Ansari, Abbas Ansari has two targets to hit at once -- clinch the Ghosi Assembly seat as well as garner votes from Muslim community in the eastern Uttar Pradesh.

The 25-year-old son of Ansari is contesting from Ghosi as the Bahujan Samaj Party candidate and is confident of victory, riding the crest of the work done by his father in the region.

Abbas, who is making his debut in the elections, wants to enter the portals of the UP Vidhan Bhawan as the youngest legislator.

"I am sure I will win the elections. My dad has done a lot for the people here despite being in jail," he told PTI in an interview.

Abbas, who is crossing swords with Fagu Singh Chouhan of BJP and Sudhakar Singh of SP, said he is getting support of all the communities -- be it Hindus, Muslims, Backwards or SCs.

"We never discriminate on caste and creed. Whosoever comes to us, we help them," he said. Abbas recently visited a temple, a move which raised eyebrows of ulemas (Muslim scholars).

Asked to comment on his temple visit, he said, "I don't let anyone dictate anything to me. I do what I think is right. Hundreds of Hindus vote for my father because he helped them in their worst times. They remain with us always, so do we."

Abbas, who is a four-time national shooting champion, plunged into electoral politics to take the family legacy forward.

"Public service flows in my blood. My family has been in politics. My great grandfather, Mukhtar Ahmed Ansari, was president of the Indian National Congress and the Muslim League during India's freedom struggle. My uncles, Afzal Ansari (former MP) and Sibgatullah Ansari (MLA), are active politicians," he elaborated.

While his father Mukhtar, facing murder charges, is contesting from Mau in eastern Uttar Pradesh, Abbas is testing his popularity in Ghosi. Sibagatullah is the BSP candidate from Mohammadabad.

When asked about the "criminal background" of his father, Abbas defended him saying "a lot of his enigma is media generated. You ask people here, who know our family well. Over 90 per cent feel Mukhtar is a good man. There is no bigger certificate than this".

Mukhtar has over 40 criminal cases against him, including those related to murder and kidnapping. He is also the prime accused in the 2005 murder of BJP legislator Krishnanand Rai, for which he is lodged in Agra jail.

He is contesting on a BSP ticket from Mau Cantonment seat, which he won in 2012.

Unlike Mukhtar, his convent-educated son has no criminal record.

"Wherever I go, I get the blessing of people who throng to meet me. I want to serve them with devotion," he said.

Abbas, who had achieved his biggest feat with a shotgun, says he fired his first shot at a national competition in 2011 and established himself as one the world's top 10 skeet shooters in subsequent world cups in Germany and Finland.

But his sporting career went into tailspin after he met with a road accident in 2014.

On his sporting career, Abbas said he still has his eyes set on qualifying for the 2020 Tokyo Olympics.

Over four lakh voters in the Ghosi constituency include 75,000 Muslims and Dalits each, 70,000 from the upper caste, over 60,000 of backward Rajbhars and 45,000 backward Chauhan caste besides others.

Abbas is banking heavily on Muslim-Dalit combination for his victory with the support of upper castes.

Polling in Ghosi constituency, which has become high-profile and is hogging media limelight due to presence of Abbas, and his father in the adjacent Mau seat, will be held on March 4 in the penultimate round of UP polls.