Winning in last 2 phases vital to justify his decisions as SP chief. 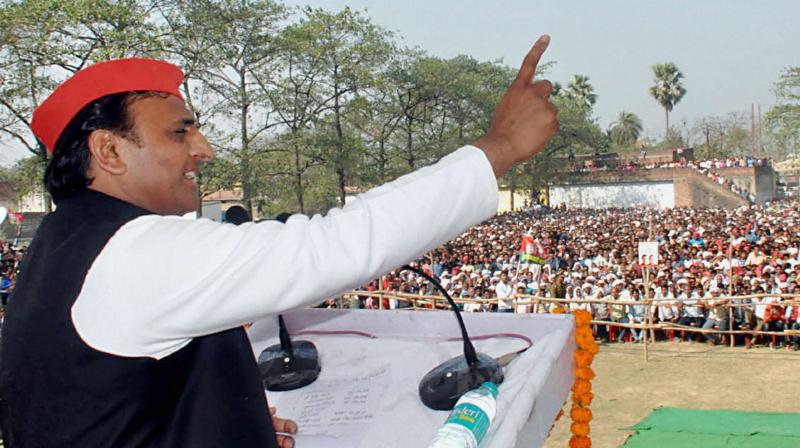 Lucknow: The last two phases of elections in Uttar Pradesh will put chief minister Akhilesh Yadav’s leadership skills to test. The decision he took immediately after becoming the president of Samajwadi Party two months ago will now have a direct bearing on the elections in these phases.

One of the major decisions that triggered off the war in the Samajwadi family was the merger of the Qaumi Ekta Dal (QED). The chief minister vehemently opposed the alliance and later denied tickets to the Ansari brother when he assumed the leadership of his party.

The Qaumi Ekta Dal has now merged into the BSP and Mukhtar Ansari, his son Abbas Ansari and brother Sigbatullah Ansari are now contesting on BSP tickets.

“We are upset with the Samajwadi Party for insulting us. It was the SP leaders who sought our support in the Rajya Sabha elections and then insisted on the merger. They should have sorted out these issues in the family first. Moreover, if Mr Akhilesh Yadav was so averse to us, why did he send his emissary to my father and uncle (both MLAs) to sign affidavits in his favour for the Election Commission?” asks Abbas Ansari who is contesting the Ghosi seat.

The QED president Afzal Ansari is intensively campaigning for the BSP and against the SP in about a dozen district of Uttar Pradesh. “The decision to keep the QED out of SP is going to boomerang on SP. If Akhilesh can campaign for the likes of Gayatri Prajapati, the Ansari brothers certainly have a better stature,” said a veteran SP leader.

Another decision taken by Mr Akhilesh Yadav was denying tickets to senior ministers Ambika Chaudhary, Narad Rai, Shadab Fatima, Vijay Misra and a dozen others. All these leaders are either campaigning for the BSP in their constituencies or not campaigning for SP.

It is perhaps because of these decisions that Samajwadi patriarch Mulayam Singh Yadav did not campaign in the elections except for his brother Shivpal Yadav and daughter-in-law Aparna Yadav.

Mr Mulayam did not even visit Azamgarh, his own Parliamentary constituency. Mr Akhilesh Yadav on Tuesday held seven rallies in Azamgarh to make up for his father’s absence but the response, sources say, was ‘tepid’.

“Azamgarh, incidentally, is also the hometown of Mr Amar Singh who has been insulted by Mr Akhilesh Yadav. The Thakurs in Azamgarh and adjoining areas have taken this as an insult to the community and are working against SP,” said a local leader.

In eastern UP, if the Samajwadi Party’s performance is not up to expectations, the leadership of Mr Akhilesh Yadav will be under a cloud.

It will also give his detractors within the party a reason to blame him for the polls and the going may not be exactly smooth for the young leader in the coming months.