UP polls: From 300-plus rallies to 2 this time for Mulayam

The 77-year-old SP veteran only campaigned for two candidates, his younger daughter-in-law Aparna Yadav and his brother Shivpal Yadav. 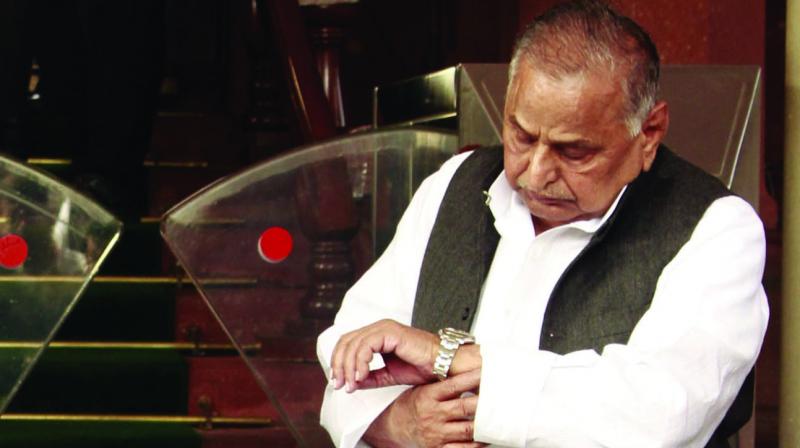 Lucknow: Campaigning is at its peak in Uttar Pradesh but Samajwadi Party patriarch Mulayam Singh Yadav has stepped out only for two public rallies this elections, a stark contrast to the over 300 rallies he addressed in the 2012 assembly polls.

Leaders from across the political spectrum travelled the entire state to woo the voters but Mulayam mostly kept indoors.

Notably, five out the seven phases of voting are already over.

His political rivals said the SP patriarch's clout has been "confined to just two" of the 403 Assembly seats in the state.

In the 2012 UP Assembly polls, Mulayam had addressed more than 300 rallies.

However, in the 2014 Lok Sabha general elections, he limited his appearances to 18 rallies -- one in each of the 18 divisions of the state -- citing health issues.

Senior BJP leader Hriday Narayan Dikshit, said, "The moment Mulayam Singh Yadav was made the party patron, his power automatically got diluted. Despite this, if he is getting a chance to campaign for even two assembly seats, he must thank his stars."

Dikshit said both the SP and the BSP are "single-cellular" organisms, in which only one person eventually prevails.

"As far as the SP is concerned, earlier Mulayam Singh Yadav used to prevail, and now it is the turn of Akhilesh," the senior BJP leader said.

He said it is not only the SP workers who are worried and concerned about 'Netaji', people from other parties are also worried about him.

Singh was of the opinion that Akhilesh Yadav has got diverted from the ideals of Lohia, who fought against the Congress throughout his life.

"Akhilesh seems to have lost his way, and is yet to find a way out," Singh told PTI.

Lok Dal President Sunil Singh said it is really unfortunate that the SP, which was founded by Netaji, is today not getting his blessings.

"What is more ironical is the fact that Akhilesh today has embraced the Congress, against which his father (Mulayam) had waged a political war throughout his life," Sunil said.

Even political rivals are not hesitating from taking a jibe at Mulayam and his brother Shivpal.

Home Minister Rajnath Singh, while addressing an election rally at Ballia, had said, "SP patron Mulayam has punctured the bicycle, while Shivpal has broken the chain of the bicycle."

Similarly, BSP chief Mayawati, at an election rally held in Ballia, took a jibe at Mulayam and said, "Mulayam seems to have been affected by putra-moh (blind love for son), and has even insulted his brother Shivpal."

Dismissing the view in some quarters that Mulayam's clout was diminishing, the SP MP from Badaun, Dharmendra Yadav, said, "We have the blessings of Netaji. In fact each and every candidate of the SP-Congress alliance has been blessed by Netaji. So, there is no question of Netaji's clout getting weakened."

The Badaun MP, who is Mulayam's nephew, claimed that even the SP-Congress pre-poll alliance had the blessings and approval of Mulayam.