India   Politics  02 May 2019  Rathore pulls out all stops to connect with voters in Jaipur Rural
India, Politics

Throughout the day, about 30-40 such meetings are being conducted in villages across the constituency. 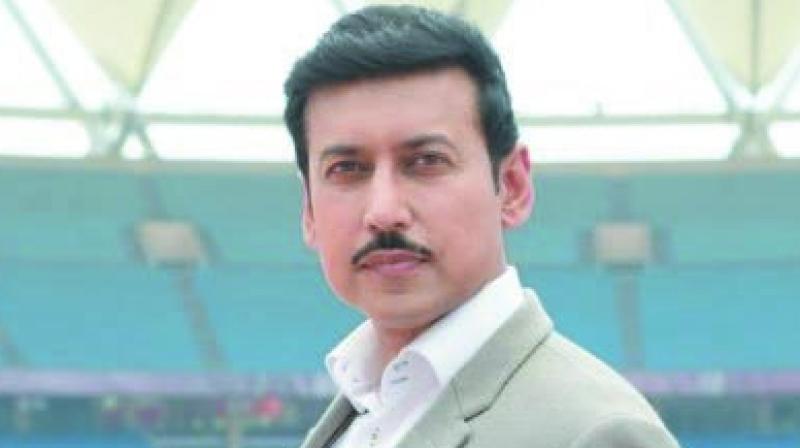 Jaipur: The last leg of campaigning for Union information and broadcasting minister Col. Rajyavardhan Rathore (Retd) is all about reigniting a personal connect with the people of Jaipur (Rural) Lok Sabha constituency, which he has represented since 2014 in Parliament.

As Col. Rathore visits small and scattered dhanis (cluster of houses) in the rural belt, the minister focuses on two things:  lending a personal touch and ensuring that the people know who can be trusted to make the nation’s boundaries secure.

As Col. Rathore goes about his public contact programme, he isn’t limiting himself to giving speeches and making tall claims.

As part of this exercise, Col. Rathore makes it a point to eat amongst the people, help out those who are busy with some chores, get into the fields and assist them in crop cutting, listen to senior citizens and most importantly agree to selfies with youngsters.

At one such gathering, Col. Rathore also saw to it that he indulged in physical activities with the village youngsters, a video of which went viral on the social media.

Interestingly, the focus during these visits to dhanis, is on Prime Minister Narendra Modi’s achievement of the past five years and emphasising the Central government’s tough policy against terrorism.

“An honest Prime Minister is working for you and against the corrupt for the past five years. We are working for strengthening the country. If we continue to express our confidence in him, we will attain glorious heights,” Col. Rathore said during the campaign at Jaisingh Pura.

“We have taken steps to ensure development, but Mr Modi’s government also worked to secure nation. We will uproot corruption, casteism and terrorism from the country. We will clean up the country,” he added at another meeting in Dyodi village.

Seeking re-election from a predominantly rural constituency, the Bharatiya Janata Party (BJP) candidate also makes it a point to raise the issue of farmers’ distress and points out to the crowd that the Ashok Gehlot government has even blocked the implementation of Pradhan Mantri Kisan Samman Nidhi.

“The Centre had received 30 lakh applications from Rajasthan for Kisan Samman Nidhi. But the Congress government is creating hurdles for them. The Congress is far too afraid of Mr Modi,” said Col. Rathore.

The distinguished sport-sman is often quick to point out that the Gehlot government has been “deliberately blocking” the implementation of several other Central schemes such as the Ayushman Bharat  programme, whi-ch provides for free medical treatment for citizens.

Throughout the day, about 30-40 such meetings are being conducted in villages across the constituency.  In several of these gatherings, Col. Rathore is weighed in bananas, oranges or other goods that are later distributed amongst the needy.

Col. Rathore is facing-off against Congress candidate Krishna Punia in a keenly-watched contest. Mr Punia is also an Olym-pian and a Commonwealth Games medal winner. The constituency goes to the polls on May 6 along with the remaining 12 Lok Sabha seats in Rajasthan. Polling for 13 seats in the state was conducted on April 29.