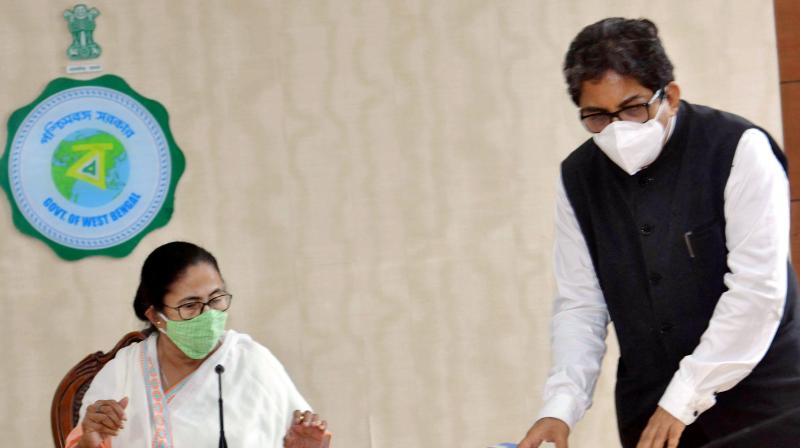 The Union home ministry late on Monday evening slapped a showcause notice on 1987-batch IAS officer Alapan Bandyopadhyay hours before he retired as the state’s chief secretary after rejecting a three-month extension. (Photo:PTI)

Kolkata: In a move that may further escalate tensions between the Centre and the Mamata Banerjee-led West Bengal government, the Union home ministry late on Monday evening slapped a showcause notice on 1987-batch IAS officer Alapan Bandyopadhyay hours before he retired as the state’s chief secretary after rejecting a three-month extension.

The notice, under Section 51 of the Disaster Management Act 2005, which is punishable by a prison term of up to two years or a fine, or both, was served to the state’s former top bureaucrat as he skipped a review meeting chaired by Prime Minister Narendra Modi on May 28 on the devastation by Cyclone Yaas in the state.

Mr Bandyopadhyay, who has been appointed by chief minister Mamata Banerjee as her chief adviser for three years after he retired from service,  was directed to “explain in writing” to the ministry within three days on “why action should not be taken against him” under Section 51 of the DM Act. This particular section relates to “punishment for obstruction” for refusal to comply with a direction given by the Central government.

The notice states: “The officer, by abstaining himself from the review meeting taken by Prime Minister Narendra Modi at cyclone-affected Kalaikunda in West Bengal on May 28, has acted in a manner tantamount to refusing to comply with the lawful directions of the Central government and is thus violative of Section 51(b) of the Disaster Management Act 2005.”

“In view of the absence, the chief secretary was called by an official as to whether they wanted to participate in the review meeting or not. Thereafter, the chief secretary arrived, along with the chief minister, inside the meeting room and left thereafter immediately,” the notice further added.

On May 28, the department of personnel and training (DoPT), which is under the ministry of personnel, public grievances and pensions headed by the PM, had directed Mr Bandyopadhyay to report to its office at North Block in New Delhi on Monday morning for his Central deputation. When he skipped it, a second notice on Monday evening asked him to report on Tuesday morning. This time too, Mr Bandyopadhyay stayed away.

While the DoPT is the cadre-controlling authority of IAS officers, the showcause notice was served under provisions of the DM Act, which is under the direct purview of the Union home ministry. The National Disaster Management Authority is headed by the PM.

Sources at Nabanna, the state secretariat, claimed on Tuesday evening that Mr Bandyopadhyay would reply to the MHA’s notice, citing proper grounds.

Attacking the CM and Mr Bandyopadhyay, BJP MLA and Leader of the Opposition Suvendu Adhikari tweeted: “Theatre of the absurd is playing out in West Bengal. For the sake of her own ego, to destroy India’s federal structure and protect the chief secretary for his indiscipline, (non-MLA) CM @MamataOfficial Didi is bringing disrepute to the CM office and the Constitution of India. What secrets does the outgoing CS know that (non-MLA) CM @MamataOfficial is moving heaven and earth to protect him? Is it really becoming of a CS to skip the Prime Minister’s meet organised to help the people in duress due to Cyclone Yaas? No. It is not.”

He claimed: “I demand strictest action be taken against the outgoing CS for indiscipline, violating service rules at a time of a natural disaster and a global pandemic, irregularities, and not helping others just because of sinister political games. TMC has failed the people of West Bengal. Looting taxpayer money is TMC’s favourite hobby. Outgoing CS and now ‘advisor’ to (non-MLA) CM @MamataOfficial will enjoy a comfortable salary of Rs 2.5 lakhs per month and cushy perks. Surely, there are better ways to spend the hard-earned money of the taxpayers.”