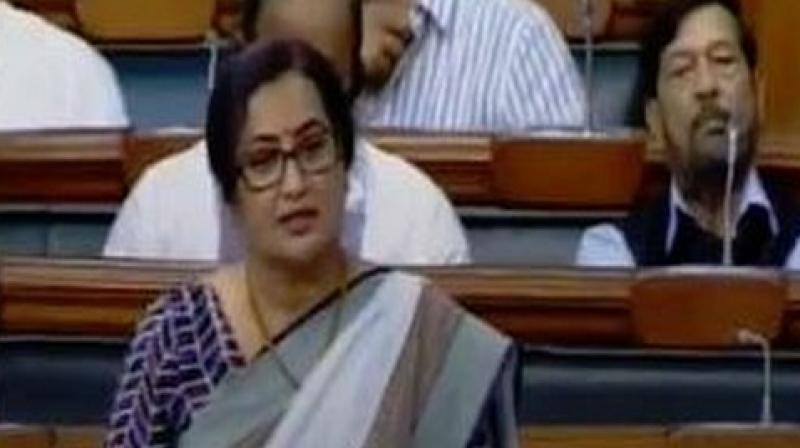 She appealed to the Prime Minister and Jal Shakti Ministry to treat the issue of farmers on an 'emergency-scale' and take immediate steps to provide them relief. (Photo: ANI)

New Delhi: Actor-turned politician Sumalatha Ambareesh on Thursday delivered her maiden speech in the Lok Sabha in which she pleaded that the Centre must save the 'Annadatas' (food providers).

She brought up the issue of farmers suicide during the Zero hour and urged the Centre and state government to take steps to strengthen existing laws to protect the interests of farmers.

"My region is already suffering from huge water crisis and impending drought conditions. This presents a very bleak scenario for farmers, especially for sugarcane and paddy growers," said Sumalatha, who pulled off a remarkable win as a BJP-backed Independent candidate against Karnataka's Chief Minister H D Kumaraswamy's son Nikhil.

She appealed to the Prime Minister and Jal Shakti Ministry to treat the issue of farmers on an 'emergency-scale' and take immediate steps to provide them relief.

"Scarcity of fodder for cattle should also be addressed by the government. I fear that we have a ready-made formula of desperate farmers suicide. We need to address these issues immediately. I make an appeal to the Prime Minister, Jal Shakti Ministry and the authorities concerned to provide immediate relief measures on an emergency scale to farmers," Sumalatha said.

Raising slogans of Jai Jawan and Jai Kishan, she asserted that the government must save the 'Annadatas'.