12 new ministers were among 22 former Congress MLAs who had pulled down the Kamal Nath government. 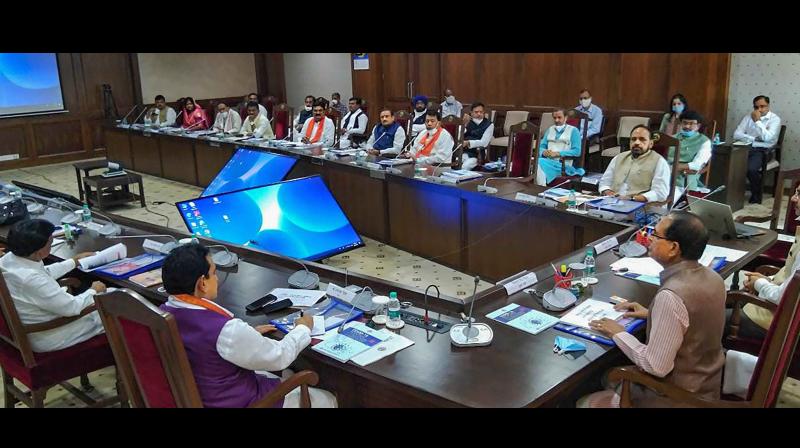 CM Chouhan held a Cabinet meeting after the expansion. (PTI)

Bhopal: Senior BJP leader Jyotiraditya Scindia’s imprint was evident in the expansion of the Shivraj Singh Chouhan ministry on Thursday, as a dozen among the 28 new ministers belonged to his camp.

Incidentally, Scindia for the first time took part in the oath-taking ceremony of new ministers at Raj Bhavan after the BJP returned to power in the state after a gap of 15 months.

“I congratulate all the new ministers. I am confident they will work for the state’s development under the guidance of Prime Minister Narendra Modi, Union home minister Amit Shah and BJP president JP Nadda,” Scindia later tweeted.

Significantly, the chief minister failed to accommodate many of his loyalists in his team despite lobbying hard with the central leadership to induct them. “Manthan se toh amrit hi niklta hai, vees to Shiv hi pee jatein hain (Nectar is generated only when there is a churning and Lord Shiv must drink poison)”, Chouhan remarked.

Former chief minister Kamal Nath lost no opportunity to take a jibe at Chouhan over his “plight”, saying: “You (Chouhan) have to drink poison (face troubles) every day (henceforth)”. He also took a potshot at Chouhan for ignoring the “just” claims of senior BJP leaders to get berths.

The move by the BJP central leadership to create two posts of deputy chief minister has been deferred for now. A senior BJP leader said the matter was “yet to be settled”. With Thursday’s expansion, the size of the ministry has gone up to 34.