The Gurdaspur seat fell vacant after BJP MP and film star Vinod Khanna, 70, passed away at a Mumbai hospital on April 27 due to cancer. 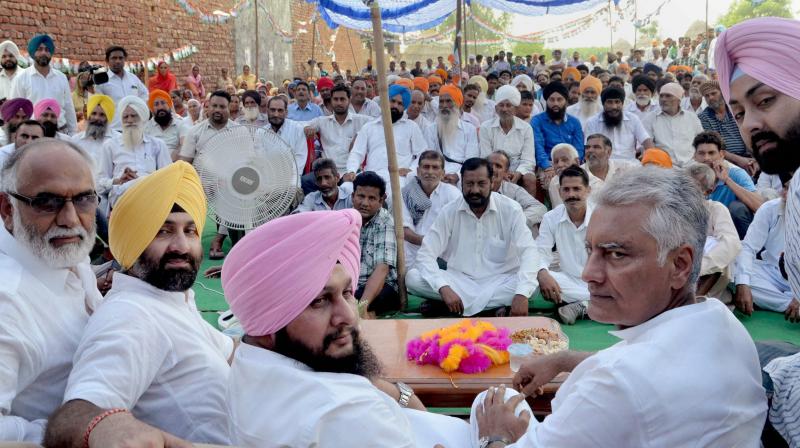 Punjab Congress president and party's Gurdaspur candidate Sunil Jakhar along with other party leaders during an election campaign rally in Gurdaspur. (Photo; PTI)

Chandigarh: The Gurdaspur parliamentary byelection in Punjab October 11 has assumed importance as the triangular contest between the Congress, Akali-BJP and AAP has turned into a prestige battle for all key players.

Its outcome is being seen as a performance report card by both the Congress, which is ruling in Punjab, and the BJP which is at the helm at the Centre. Chief Minister Captain Amarinder Singh realises the importance of winning this bypoll and is busy highlighting the recent farm loan waiver.

The byelection will also be important from the view point of electoral milestone. The EC has said that EVMs and Voter Verifiable Paper Audit Trails (VVPATs) will be used in all polling stations, making Gurdaspur the first Parliamentary constituency in the country to use the facility.

The Gurdaspur seat fell vacant after BJP MP and film star Vinod Khanna, 70, passed away at a Mumbai hospital on April 27 due to cancer.

This seat is considered a bastion of Akali-BJP since the advent of Vinod Khanna in Punjab politics two decades ago. The triangular contest on October 11 between Sunil Jakhar of Congress and Sawran Singh Salaria of the BJP-Akali Dal Combine and Major General Suresh Khajuria of AAP, is thus a litmus test of sorts for the all three main political parties.

While some political observers consider the contest to be mainly between state Congress chief Mr Jakhar and Mr Salaria of the BJP-Akali combine, the young outfit, AAP, which won 20 Assembly seats in the early this year, wants a good performance for keeping the morale of its cadre up after its plans of storming to power in Punjab, like in Delhi, did not materialise.

Mr Salaria is flamboyant businessman from Mumbai who is wooing the voters by saying that he has no lust for power.

"I have all the money I need and I have left all comforts to come and live this tough life," he said at a meeting.

On the other hand, Mr Jakhar of the Congress, has called for debate on issues and avoid any personal attack.

"Gurdaspur needs a representative who can flag their problems. I consider myself as a genuine and responsible person to raise people's voice in Parliament," he said.

A loss in the bypoll for Akali-BJP will indicate that the combine has not yet gained the trust of the voters after losing the Assembly elections. A loss will be seen as voters' disapproval of the Narendra Modi government's policies.