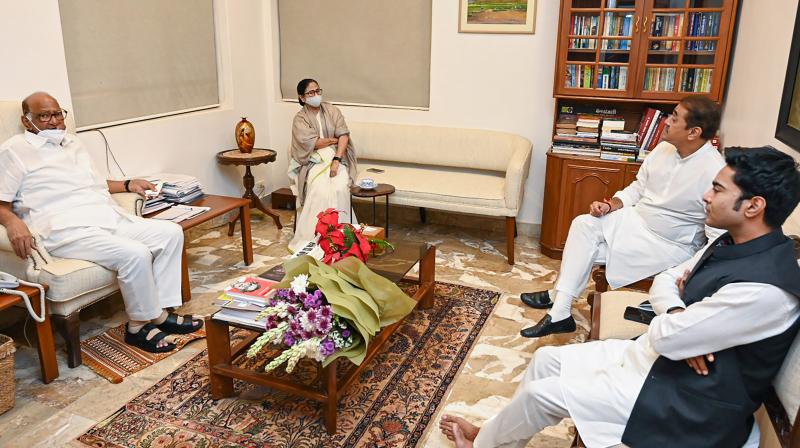 Mumbai: West Bengal chief minister Mamata Banerjee on Wednesday took a swipe at the Congress saying that the United Progressive Alliance (UPA) led by the grand old party does not exist anymore. In a veiled dig at Congress leader Rahul Gandhi, she also said one cannot achieve anything by staying abroad most of the time.

During her Mumbai visit, the Trinamool Congress (TMC) chief met NCP supremo Sharad Pawar at his residence. To a query on whether Mr Pawar will lead the UPA, she said, “What UPA? There is no UPA now. We will decide it together.”

Ms Banerjee’s barbs were seen as aimed at the Congress which has reportedly strained its ties with the TMC. When asked whether there will be an alternative without the Congress, she said, “What Sharad Ji said is that there should be a strong alternative that can fight. If someone does not want to fight, what can we do? We feel that everyone should fight.”

“A firm alternative course should be made as nobody is fighting against ongoing fascism. No one can do this alone. Whoever is strong in whichever place has to fight. Sharad ji is the senior-most leader and I came to discuss as a political courtesy,” she said

However, Mr Pawar said that leadership was not an issue at present and all like-minded parties are welcome to join the fight against the BJP.

“Pleased to meet Hon’ble CM of West Bengal Smt @MamataOfficial at my Mumbai residence. We discussed various issues. We agreed upon the need to strengthen the collective efforts and commitment towards safeguarding democratic values and ensuring the betterment of our people,” he later tweeted.

Earlier in the day, interacting with members of civil society, Ms Banerjee took a dig at Rahul Gandhi saying, “Continuous endeavour is necessary in politics. You can't be abroad most of the time.”

"I had suggested to the Congress that an advisory council comprising prominent personalities from civil society be set up to give a direction to the opposition, but that did not materialise," she added.

Meanwhile, Maharashtra Congress chief Nana Patole has hit back at the West Bengal CM saying the country is more important than personal ambitions and the fight against the BJP needs to be fought unitedly keeping egos aside. “A political party restricted to one state cannot be an alternative to BJP. The Congress is the only viable political alternative for the BJP,” he said.