The finance minister, who was the first to speak from the treasury benches, was not lacking in sting. 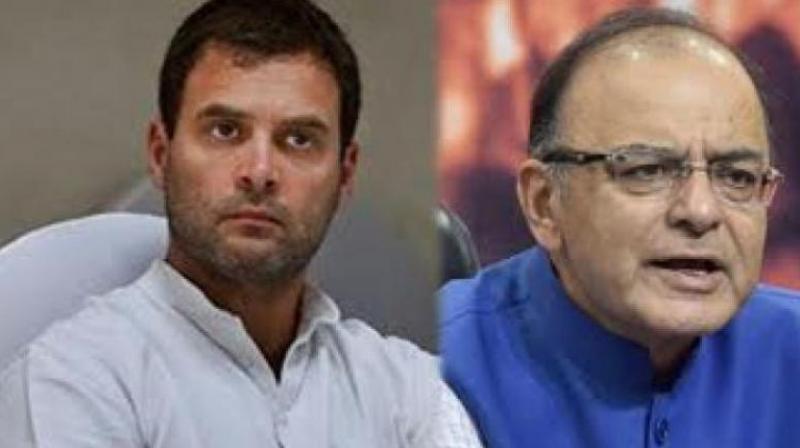 New Delhi: The Congress on Wednesday launched a stinging and focused attack on Prime Minister Narendra Modi over the Rafale deal, bringing the controversial defence agreement back into the political narrative in this crucial election year. A combative Congress president Rahul Gandhi went to the extent of challenging Mr Modi to a “one on one” debate on Rafale and accused the PM of “lacking guts” to do that.

The day, which saw a high-decibel faceoff between the Congress president and finance minister Arun Jaitley in the Lok Sabha, began with the Opposition leader brandishing an audio file where Goa health minister Vishwajit Rane is purportedly saying that chief minister Manohar Parrikar, a former defence minister, has claimed that he has files on Rafale in his bedroom.

Creating high drama, Mr Gandhi, opening the debate on the Rafale deal in the Lok Sabha, sought Speaker Sumitra Mahajan’s permission to play the tape in the House. When Ms Mahajan refused to allow this, citing rules and amid objections by Mr Jaitley, the Congress president asked that he be allowed to read from the transcript instead. This too was disallowed by the Chair till the tape was authenticated.

At a press conference at the AICC headquarters later, Mr Gandhi claimed Mr Parrikar was “blackmailing” the PM, and challenged Mr Modi to an open “one on one” debate with him on Rafale.

In the Lok Sabha, when the Congress president opened the debate on his party’s behalf, the confidence emanating from the recent wins in three Assembly polls was evident as the first salvo he fired was against the Prime Minister. “The PM said in his interview that no one is questioning him on Rafale. But this is not true. The entire nation is asking him. He is not speaking.”

He then repeated the questions which the Congress has been on asking about Rafale — why the demand for 126 aircraft was reduced to 36, who had changed it, did the Air Force ask or request the government for this and if the acquisition of the aircraft was so urgent, then why hadn’t a single one been delivered yet.

He questioned why the price of the aircraft went upto Rs 1,600 crores from Rs 526 crores.

Amid high drama when Mr Gandhi accused the PM of favouring businessmen Anil Ambani to secure the deal, and the Speaker objected to his naming a non-member, the Congress president started calling him “AA”.

The finance minister, who was the first to speak from the treasury benches, was not lacking in sting. He accused Mr Gandhi of “lying”, and said if he wants to play the tape, he has to authenticate it. Claiming the tape was “false and fabricated”, he said the Congress president might have to face a privilege motion and even expulsion from the House if the tape turns out to be fabricated.

He took on Mr Gandhi over the use of acronym for Anil Ambani and said “when he (Rahul Gandhi) was a young man, he was playing in the lap of one ‘Q’,” an obvious reference to key Bofors accused Ottavio Quattrocchi, now deceased.

He also mentioned the recent disclosure allegedly made by AgustaWestland accused Christian Michel and referred to terms like “Mrs G” and “the Italian lady” and “her son” to attack the Congress leadership.

“There are some people who have a natural dislike for the truth. Every word spoken for the last six months on this subject, including in this House (by them), are false... He has a legacy of speaking falsehoods,” he said, adding: “This man lies and lies repeatedly”.

Amid this fierce attack on the Gandhi family, Congress MPs trooped into the Well of the House and were seen throwing paper planes in the direction of the treasury benches.

The finance minister ruled out a probe by a Joint Parliamentary Committee as demanded by the Congress, saying there was no need for it as the Supreme Court has already satisfied its “conscience” on the issue. The court had on December 7 said that probing the Rafale was not under its jurisdiction.

This was rebutted by the Mr Gandhi at his press conference later, where he claimed the finance minister  had himself provided the figure of Rs 1,600 crores and the total deal of Rs 58,000 crores for 36 aircraft means that each of them costs Rs 1,600 crores.

On the audiotape, he said: “The Goa minister is saying clearly that Parrikarji said in a Cabinet meeting that he has a complete file on the Rafale deal with all details and therefore he can’t be disturbed. There may be other such audiotapes.”

“What Parrikar is doing is threatening the Prime Minister and blackmailing him in a way. We have been raising this for a long time. The question is what information is there in Parrikar’s bedroom and what files are there and what could be the impact on Narendra Modi?” Mr Gandhi alleged.