Ridiculing the loan waivers given by the Congress in Madhya Pradesh, the PM said some beneficiaries have been given cheques of Rs 13 only. 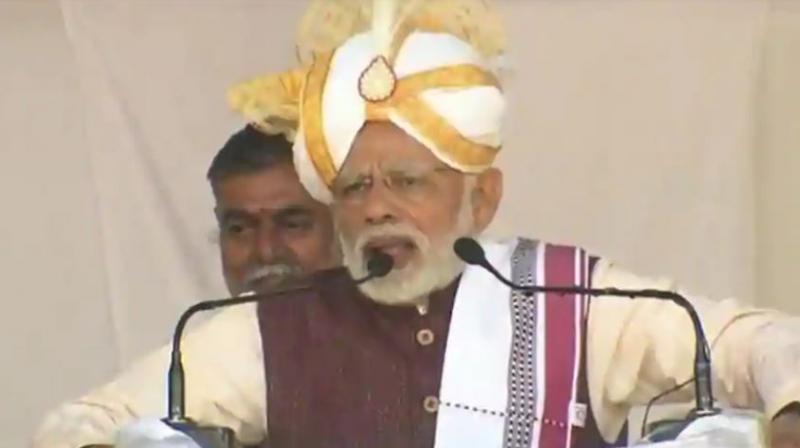 Jammu: Attacking the Congress over its promise of farm loan waiver, Prime Minister Narendra Modi said on Sunday that the party uses the measure only to win elections.

The Congress had promised to waive farmers' loans worth Rs 6 lakh crore in 2008-09, but it gave a loan relief of Rs 52,000 crore only after coming to power, he claimed.

"CAG report found that about 25-30 lakh people who got loan waiver were not even eligible for it," Modi said at a rally at Vijaypur here.

Ridiculing the loan waivers given by the Congress in Madhya Pradesh, the prime minister said some beneficiaries have been given cheques of Rs 13 only.

He said under his direct benefit transfer PM-KISAN scheme, Rs 75,000 crore will be allocated annually. It means Rs 7.50 lakh crore will be deposited in farmers' accounts in the next 10 years.

The scheme aims to cover 90 per cent of the farmers who have less than five acres of land. Rs 6,000 will be transferred to their accounts annually in three equal installments of Rs 2,000 each, he said.

"People know the track record of the country's 'naamdar'. They get 'fever' of loan waivers just before elections... They try to act as 'messiah' of farmers by announcing farm loan waivers once in 10 years," he said referring to the UPA rule.

Ironically, the BJP had also announced loan waivers for farmers in Uttar Pradesh ahead of assembly elections in 2017.

After assuming power, Chief Minister Yogi Adityanath had announced loan waivers of up to Rs 1 lakh relating to small and marginal farmers.

Referring to Kashmiri Pandits, the prime minister said the central government is committed to respect and give dignity to the displaced community.

"The pain that they had to undergo, they had to leave their homeland. I have never said this but their pain is within me too," he said.