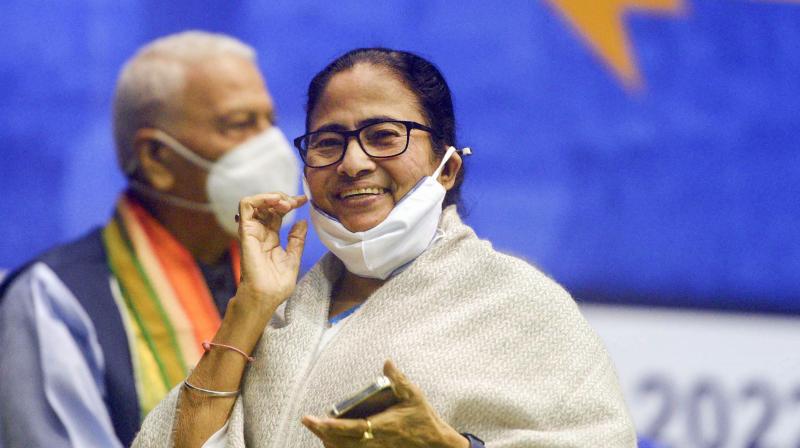 Kolkata: Re-elected as Trinamul Congress chairperson unopposed, Mamata Banerjee on Wednesday urged all regional parties to “work unitedly” with her to remove the BJP from power at the Centre in the next Lok Sabha elections.

The West Bengal chief minister asked them to cement their base in their home states in the next two years and vowed to “stitch them together”, as she set forth her national ambitions. She also announced that the TMC’s first working committee meeting will be held in New Delhi.

Ms Banerjee also accused the Congress of actually working to aid the BJP in several states and of living with “ego” after her failed attempt to ally with the grand old party for the Goa Assembly polls. The TMC supremo also reiterated that the TMC would support the Samajwadi Party in the forthcoming Uttar Pradesh Assembly polls.

Addressing the TMC gathering at Netaji Indoor Stadium, Ms Banerjee said: “We are ready to fight. We are prepared to oust the BJP. In the coming days, we want all regional parties to come forward and work unitedly to defeat the BJP politically in 2024. This is our pledge. Those who get scared, die. Those who fight, survive. We will fight but we will never lose.”

She told the TMC leaders: “You coordinate with them, build a platform and work unitedly. Now Jawhar Sircar (retired bureaucrat and TMC Rajya Sabha MP) is there. You can coordinate with him. There are many such people. When I visited Mumbai recently, civil society members joined me. The same thing happened in Goa too. It will happen more gradually. Nothing can happen in a day.”

Outlining a roadmap, Ms Banerjee added: “We still have two years’ time. Bengal has to be made more solid, meanwhile, to ensure our victory in all 42 (Parliament) seats. If Mr Modi and the BJP are to be defeated, one must remember that charity begins at home. Your base should be strong at your home. We should not do something which empowers the BJP. We will do something that would remove barriers in 2024. It should not be who will be in this group or that. There should be one group and uniformity in the TMC. We will take our party to a pan-India level further. Our economic, external affairs and other policy decisions will be released at our first working committee meeting, which will be held in New Delhi.”

On the main Opposition party, the CM alleged: “The Congress garners votes for the BJP in Meghalaya and Chandigarh. We wanted all anti-BJP parties to be united. But if someone ignores (us) and lives with ego, then Rabindranath Tagore’s famous song Ekla Chalo shows me the path… If They Pay No Heed to Your Call, Walk Alone! While walking alone, I will stitch the whole of India with one flower after another like a garland.”

Attacking the Union Budget, Ms Banerjee said sarcastically that the BJP would “devour the curry of diamonds” as the jewel was made cheaper in the Budget.