PM Modi assures that world's most advanced AK-203 rifle will be manufactured in Ordinance factory in UP's Korwa. 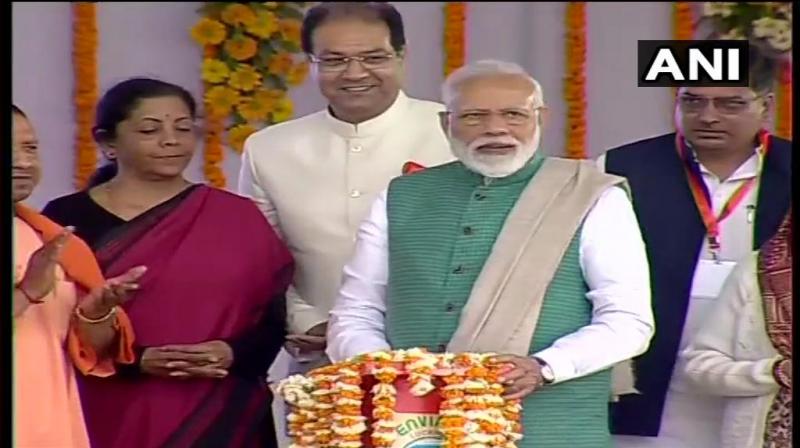 In a veiled attack on Congress, Modi said that the needs of security forces were ignored and promises of the people were never fulfilled in Rahul Gandhi's home turf. He said, "We might have lost election here but we won your hearts. In the last five years, Smriti Irani has worked so hard for the development of this region. She never made you feel whether you made her win or lose, she worked more than the person who won here."

PM Modi also alleged that the Ordinance Factory Board unit nearby has been lying idle for the last several years, and lashed out at the Congress president Rahul Gandhi and the previous governments for neglecting Amethi.

In his speech, Modi stated that the requirement of advance weapons were put forward by Army in 2005. "Your Member of Parliament (MP) laid down the foundation stone of the factory in 2007. That time they promised to start work by 2010."

Even after three years of laying down the foundation stone, they were not able to decide how to manufacture these advanced weapons.

Defence Minister Nirmala Sitharaman was here to participate in the inauguration ceremony of the plant which would manufacture AK-203 rifles.

Sitharaman credited Prime Minister Narendra Modi for being instrumental in the signing of the deal for setting up a plant to manufacture AK-203 rifles in Amethi.

“Prime Minister Narendra Modi made all efforts for this deal. He talked to US President Vladimir Putin about it. We are going to make the world-famous AK-47 assault rifle here,” she said while addressing a rally here.

Union Minister Smriti Irani, UP Chief Minister Yogi Adityanath, and others were present on the occasion.

Modi attacked opposition stating that it is the tendency of some to forget the voters after attaining votes. They want to keep the poor in poverty so they can say ' gareebi hatao ' generation after generation. We are giving strength to the poor to bring them out of poverty.