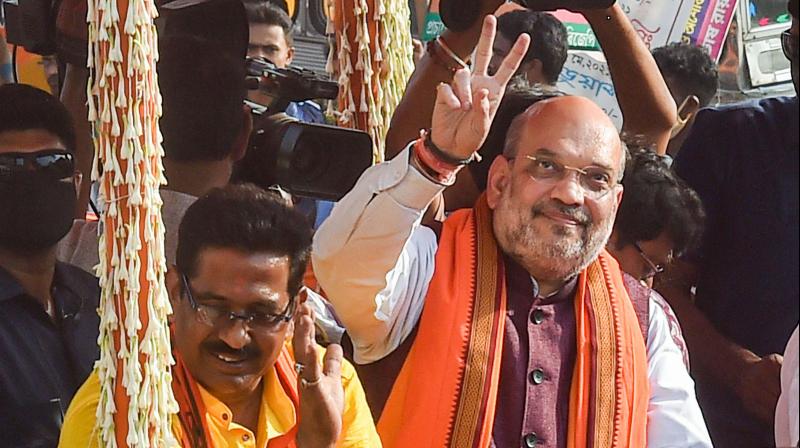 Union Home Minister Amit Shah during a roadshow in support of BJP candidates ahead of the third phase of West Bengal Assembly polls, at Baruipur Paschim in South 24 Parganas. (Photo: PTI)

Kolkata: Continuing his trick to demoralise the Trinamul Congress and garner votes for the BJP with his exit poll-style assessment, Union home minister Amit Shah on Friday put more than 50 seats including Nandigram out of 60, which went to the first two phases of the elections in the state, in the saffron party's kitty.

He made the startling claim at two back-to-back BJP rallies in North Bengal where he set a target before his party of bagging another 50 seats. At Sitalkuchi in Coochbehar, Shah said, "All have seen  the first two phases of polls. What happened there? Kamal khila hai (Lotus has bloomed). Mark my words. The BJP has already won more than 50 out of 60 seats."

At Kalchini in Alipurduar he added, "Two phases of polls covering 60 seats were held. Among these, lotus is going to bloom in 50 seats for the BJP. I have come to North Bengal because here 50 seats out of 60 will not be enough. BJP needs 50 out of 50 here."

On May 28, Shah had made a similar forecast, apparently based on the feedback from his party and internal security agencies, from New Delhi, a day after the first phase polls in the state, predicting the BJP's victory in 26 seats out of 30.

Though he did not reveal this time exactly how many seats the BJP won out of another 30, a straight arithmetic calculation hints at the figure to be at least 24 seats in the second phase of the polls, held on Thursday, which matches his assessment of his party's win in 50 plus seats so far.

Triggering speculation, like Prime Minister Narendra Modi, Shah also asserted that Chief Minister Mamata Banerjee, who contested at Nandigram against her former aide Shuvendu Adhikari of the BJP, suffered defeat and mocked the TMC chief for allegedly refusing to contest from any seat in North Bengal.

"Yesterday Didi contested the polls in Nandigram. It is now certain she has lost there. Time has come now for her to go. Later her adviser met and asked her: where will you now fight from? She told him: ‘Field me anywhere except North Bengal because people of the region will not elect me’," he claimed while adding, "On May 2 counting of votes will start at 10 am. At 11 am BJP will take the lead. At 2 pm Didi will be gone."

In a veiled reference to the separate statehood demand of Gorkhaland, the Union home minister tried to woo the Gorkhas to get back their votebank with a promise to work for a "permanent political solution" in the hills. He talked of sops for Nepali films and introduction of a Nepali radio channel.

Shah alleged that North Bengal, which is 700 km away from Kolkata, is 7,000 km from Banerjee's "heart" as her party stands on three Ts — Tolabaji, Tanashahi and Tustikaran while the BJP means three Vs — Vikash, Vishwas and Vyapar.