Mamata to PM: Don't need your advice, will win Nandigram

When I have contested from Nandigram, I will indeed win there and blacken your face, she said 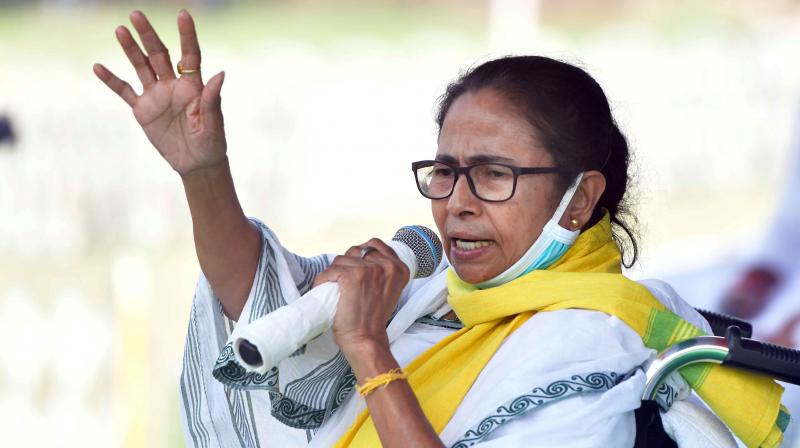 Kolkata: West Bengal Chief Minister Mamata Banerjee on Friday told Prime Minister Narendra Modi not to suggest that she would be fighting from another seat in the ongoing Assembly elections in the state. Exuding confidence of winning from Nandigram, the Trinamul Congress supremo also threatened to blacken his face while asking him to exercise “control” on Union home minister Amit Shah, alleging that his provocation was behind the unrest in the state.

"I do not belong to your party that you can control me and give a suggestion of fighting from another seat. When I have contested from Nandigram, I will indeed win there and blacken your face. I do not agree to work on your advice. I work on people's advice," Banerjee said at a TMC rally in Dinhata of Coochbehar of North Bengal. She was replying to Modi's jibe on Thursday about whether she had plans to fight from another seat in fear of losing in Nandigram to Shuvendu Adhikari of the BJP, her former aide.

Training her guns on the Union home minister, who was in North Bengal during her campaign, Banerjee argued, "How can Shah be a saviour? He first needs to decide the place where he will stay. He is someone who neither runs the country nor the Union home ministry. He only indulges in goondaism and kills people by orchestrating riots. I ask the PM: You first control your home minister before coming to control us."

Countering Shah's latest claim of BJP victory in at least 50 out of 60 seats in the first two phases, the Trinamul chief said, "We have been able to turn those areas which were minus earlier into plus. We also made sure how to turn the opposition minus into those areas where we are in plus."

She also alleged, "I am sorry to say the Assembly polls are not being conducted by the Election Commission but by Shah. On his order the CRPF, whom I respect, resorted to atrocities in Nandigram though our party was being attacked. One of our workers got injured and is in coma now. In another district another party worker was killed. I am still remaining silent waiting for the polls to be over. None of those attackers will be spared. I also know very well how to fight back and give a fitting reply."

Banerjee slammed the BJP over indulging in electoral malpractices after an EVM was found in a BJP candidate's car in Assam. "Police are casting votes there," she alleged.