India   Politics  03 May 2017  Move on from UP victory, save our soldiers: Shiv Sena attacks PM Modi
India, Politics

Move on from UP victory, save our soldiers: Shiv Sena attacks PM Modi

Earlier on Monday, the Pakistani soldiers along with their BAT, which include trained border inhabitants, launched a joint attack. 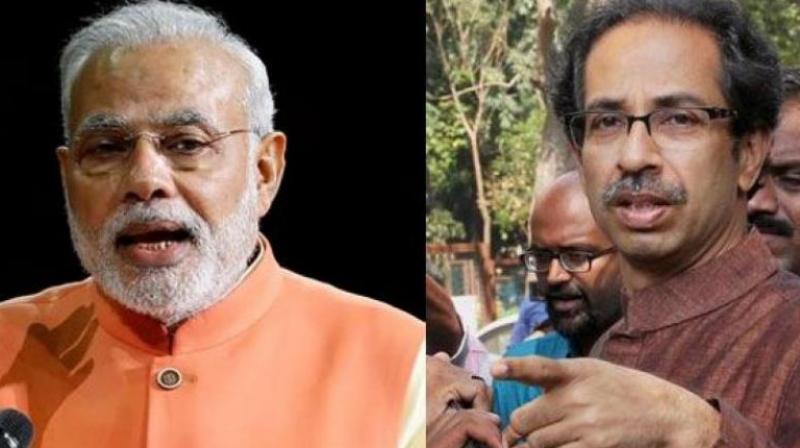 The Prime Minster should disclose as to how many countries are supporting us on this issue, it said. (Photo: PTI)

New Delhi: The Shiv Sena on Wednesday continued its assault on the Centre over the mutilation of Indian soldiers by the Pakistani Army, putting onus on Prime Minister Narendra Modi to reveal how serious he is about tackling the matter on an international level.

"The Prime Minster should disclose as to how many countries are supporting us on this issue. Former defence minister Manohar Parrikar's previous remark on such issues and his resignation from his post indicates how serious the government is to tackle this issue,"said the Shiv Sena mouthpiece Saamana.

The editorial further slammed present Defence Minister Arun Jaitley saying that just by making fancy statements the problem is not going to end, and it is high time to take serious action on the same.

"This is the same party ruling in the Centre who declared during the Congress regime to behead 10 Pakistanis if they behead one of ours. The regime has changed, but no change can be witnessed in the barbaric condition of our soldiers," it said.

It further said that the surgical strike carried out along the Line of Control (LoC) was not enough to respond to Pakistan's attack on Uri, Machil and Pathankot, adding that the BJP may consider the Uttar Pradesh Assembly Election victory as one of their greatest achievements, but the loss of  lives of Indian soldiers is the greatest defeat of the country.

Bhatt also raised the issue of fire support provided by the Pakistani posts. "DGMO Indian Army conveyed that such dastardly and inhuman act is beyond any norms of civility and merits unequivocal condemnation and response," the Indian Army said in a statement.

Earlier on Monday, the Pakistani soldiers along with their BAT, which include trained border inhabitants, launched a joint attack.

"Pakistan Army carried out unprovoked rocket and mortar firing on two forward posts on the Line of Control in the Krishna Ghati sector. Simultaneously, a BAT action was launched on a patrol operating in between the two posts. In an unsoldierly act by the Pakistan Army, the bodies of two of our soldiers in the patrol were mutilated. Such despicable act of Pakistan Army will be appropriately responded," read the Indian Army's statement.

They first fired rockets and followed this up with firing from automatic weapons, near Kranti Post located in Poonch's Krishna Ghati Sector around 8.30 a.m. The Pakistanis then crossed the LoC, entered 200 meters into Indian Territory, and attacked a joint patrol of the Army and Border Security Force (BSF), heading towards a nearby post.

It is the same Krishna Ghati sector where the Pakistani BAT had beheaded Lance Naik Hemraj and badly severed the head of Lance Naik Sudhakar Singh of 13 Rajputana Rifles, on January 8, 2013.