India   Politics  03 May 2021  For West Bengal, the BJP continues to be an 'outsider'
India, Politics 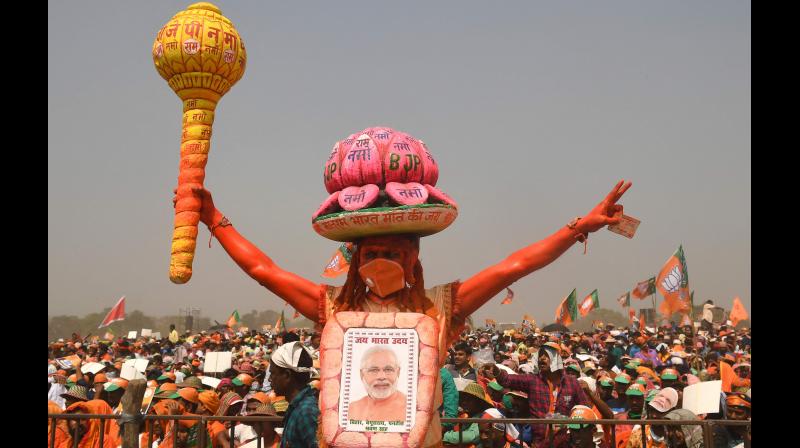 For the BJP, which had been elated after its performance in the state in 2019 Lok Sabha polls, when it won 18 out of 42 Lok Sabha seats and its vote share grew to 40.25 per cent, the Assembly results were shocking as the party top brass was claiming to bag 200-plus seats. (AFP)

New Delhi: For West Bengal, the BJP continues to be an “outsider” as Mamata Banerjee-led TMC registered its third consecutive win in the state which had witnessed one of the most acerbic and high-decibel campaigns by both the parties.

Though the results indicated consolidation of minority votes in ruling TMC’s favour, the BJP, in terms of Assembly constituencies, gained overwhelmingly, with the party bagging more than 70 Assembly seats as compared to its previous tally of mere three seats in the 292-member Assembly.

Results proved that a majority of voters refused to ditch the "Daughter of Bengal" for the BJP’s promise of turning the state into "Sonar Bangla" and they also refused to accept the saffron party’s vision for "Asol Poribortan".

In West Bengal, which has a history of personality driven politics, the BJP’s bevy of "star campaigners", including Prime Minister Narendra Modi, failed to overshadow Ms Banerjee’s personality and leadership despite anti-incumbency, charges of corruption and deteriorating law and order plaguing the ruling party.

The TMC had labelled the BJP as a party of "outsiders" and the latter failed miserably to gauge the mood of Bengalis.

After the results, Mr Modi, who was leading the charge against Ms Banerjee during the campaigning, tweeted: “Congratulations to Mamata Didi for AITC win in West Bengal. The Centre will continue to extend all possible support to the West Bengal government to fulfill people aspirations and also to overcome the Covid-19 pandemic.” The PM also thanked people of the state for blessing the BJP, whose “presence has significantly increased” and applauded party cadre for “their spirited effort in the polls.”

For the BJP, which had been elated after its performance in the state in 2019 Lok Sabha polls, when it won 18 out of 42 Lok Sabha seats and its vote share grew to 40.25 per cent, the Assembly results were shocking as the party top brass was claiming to bag 200-plus seats.

While the BJP’s campaign was high on "Hindutva" and party leaders kept highlighting the TMC’s minority appeasement, the issue failed to receive the expected response from the "Bhadralok," which the BJP poll managers had been trying hard to woo.

While it made massive inroads in the rural belt, which the party claimed had been suffering from “TMC’s corruption, tolabazi and cut-money,” the BJP failed to project itself as the “keeper of pride of Bengal” among the majority of voters in the state. Also, the BJP's "Hindutva" failed to impress even the culturally strong Hindu vote-bank.

Unlike in the Lok Sabha polls, women voters, considered one of the strongest votebanks of Mr Modi's, continued to rally behind Ms Banerjee who almost single-handedly fought one of the fiercest battles against the entire BJP Central leadership.

“Problem is not with a mode of worship or followers of a particular religion but when people vote as a religious community it defeats the very basic  principle of democracy. Is it not happening in Indian democracy?... TMC's victory in WB is a post-truth phenomena… Wake up call: Minority veto in electoral politics will be devastating for our secular democracy,” tweeted Rajya Sabha MP and BJP leader  Rakesh Sinha.

However, maintaining optimism, Mr Sinha said “Democracy sometimes endorses undemocratic leaders, this happens in politically conservative society. But eventually democracy regains its legitimate space. BJP is the future of Bengal. We will tirelessly continue our mission in Bengal.”

Some BJP leaders also felt that the results indicated the BJP “got infected” with anti-incumbency and anger against the TMC and its leaders as more than two dozen of TMC leaders, including sitting MLAs, had joined the saffron fold in the past couple of years.

“While TMC fielded new faces to overcome anti-incumbency, BJP fielded TMC leaders who were facing anti-incumbency and people’s anger over various issues,” said a senior BJP leader. “Also, the results have proved that the Congress and the Left sacrificed themselves to make sure that the BJP does not capture power,” added the leader.