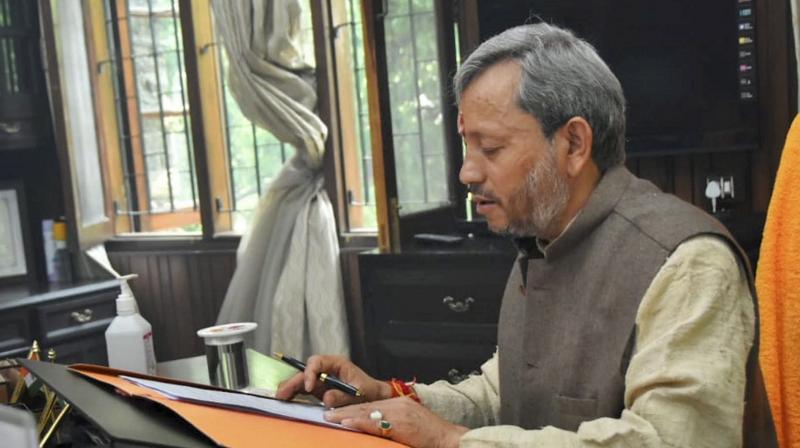 New Delhi/Dehradun: Uttarakhand chief minister Tirath Singh Rawat resigned late on Friday night when he met state governor Baby Rani Maurya in Dehradun, after holding the post for less than four months. The BJP legislature party is due to meet in the state capital on Saturday to choose his successor.

Mr Tirath Rawat, who replaced Trivendra Singh Rawat as CM on March 10 but was an MP, not a member of the state legislature, was required under the Constitution to get elected to the Assembly within six months, by September 10, to continue as CM. But with the Election Commission now unlikely to hold any byelection, as fresh Assembly elections are due in just over seven months, the state was facing a “constitutional crisis”, as Mr Tirath Rawat himself said.

The BJP was anyway looking for a change of guard in the state as it did not want to go into an election under the current CM’s leadership. The BJP bagged 56 out of the state’s 70 Assembly seats in 2017 but retaining power in next year’s Assembly polls may be a challenge, partly because of a resurgent Congress Party.

Mr Rawat went to Raj Bhavan to resign hours after returning from New Delhi, where he had been summoned by the BJP’s top leadership on Wednesday. He met both BJP president J.P. Nadda and home minister Amit Shah in the national capital.

The CM held a press conference in Dehradun late Friday soon after he returned from Delhi to highlight the development work, including Covid-19 relief measures, undertaken during his 117-day tenure, but did not say anything about whether or not he had offered to resign.

For the BJP, already mired in Covid-19 mismanagement issues during the Kumbh Mela and corruption allegations, and with the Congress in a resurgent mode, a third CM in its five-year tenure will only add to its already existing worries. Earlier, its decision to change Trivendra Singh Rawat in March, less than a year ahead of polls, had put a question mark on its rule and gave enough ammunition to the Opposition party.

While a “constitutional crisis” was cited for Mr Tirath Singh Rawat’s exit, speculation was rife that it would not be easy for Mr Rawat to win the bypolls – in case the EC agreed to hold them -- if he was not fielded from a party stronghold. Two Assembly seats are now vacant -- Gangotri and Haldwani -- after the death of sitting MLAs, including Congress stalwart Indira Hridayesh, who represented Haldwani Assembly constituency.

What made matters complicated for him was the EC’s decision to defer the holding of some Lok Sabha and Assembly bypolls due to the Covid-19 pandemic. The poll panel had said it would not be appropriate to hold the electoral exercise till the pandemic situation improves significantly.

Observers said with the Assembly’s term coming to an end in less than a year, the EC was under no compulsion to order bypolls for vacant seats. Scathing criticism by the courts of the string of elections held during the Covid-19 pandemic may have also contributed to the EC’s decision on the Uttarakhand byelections.

Section 151A of the Representation of the People Act 1951 mandates the Election Commission to fill vacancies in Parliament and state legislatures through bypolls within six months from the date of occurrence, provided that the remainder of the term of the new member is one year or more. The term of Uttarakhand Assembly is due to end in March.

Political observers said the Centre might also not press for holding byelections in Uttarakhand as these are also due in other parts of the country and the hill state cannot be made an exception.