The ruckus forced three adjournments of Rajya Sabha while in the Lok Sabha the Congress staged a walkout, halfway through Zero Hour. 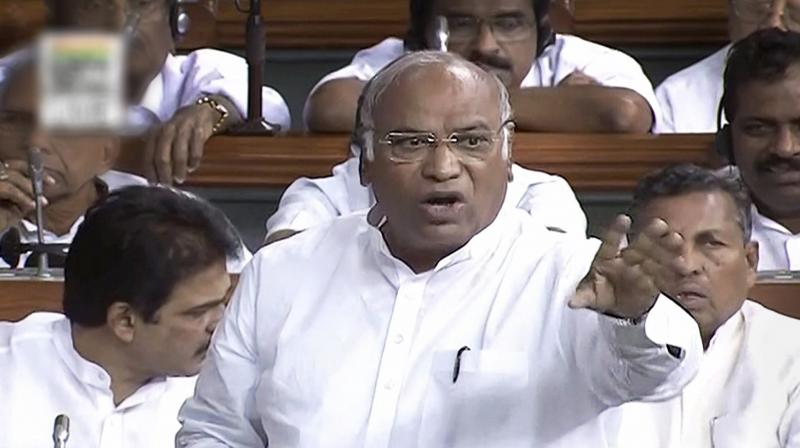 New Delhi: The issue of income-tax raids on Karnataka energy minister D.K. Shivakumar rocked both Houses of Parliament on Wednesday with the Opposition Congress shouting itself hoarse alleging “political vendetta”. Finance minister Arun Jaitley told the Congress not to link the searches with the forthcoming Rajya Sabha polls in Gujarat.

The ruckus forced three adjournments of Rajya Sabha while in the Lok Sabha the Congress staged a walkout, halfway through Zero Hour.

Mr Jaitley, while rejecting charges of political motives behind the raids in both the Houses, said no search operation was conducted at the resort in Karnataka where Gujarat Congress MLAs have been staying. Mr Shivkumar is the host of the MLAs in Karnataka.

The uproar in Parliament comes at a time when 44 Congress MLAs from Gujarat are lodged at a resort near Bengaluru since July 28 to prevent the BJP from allegedly “poaching” on them by allegedly offering Rs 15 each ahead of the August 8 Rajya Sabha election in the state. Congress Rajya Sabha nominee Ahmed Patel, senior leader and political adviser to party president Sonia Gandhi, is pitted against BJP’s Balwantsinh Rajput, who recently quit as a Congress MLA.

Mr Jaitley said that the raids were linked to “an individual”, an indirect reference to Mr Shivakumar, who had “gone and parked himself” at the resort and was picked up from there for questioning.

“I have taken details from the income-tax department and verified (them) myself. No resort where the Gujarat MLAs are lodged has been searched.”

“In that resort where your MLAs are staying, no search has taken place, no MLA has been searched. A particular individual was to be searched. He had gone and parked himself in that resort,” he said.

“He himself went to the resort. As per the procedure, the person against whom the raid is conducted has to be confronted to take his statement. The officials only visited the resort where the minister was tearing off papers. We have also collected these papers and done a ‘panchanama’,” the minister said.

Reacting to the Congress allegation that the government was misusing investigating agencies like CBI, ED and IT, Mr Jaitley said,  “Whether it is a use or abuse, it depends on the recovery.”

In Lok Sabha, Congress leader Mallikarjun Kharge raised the issue but Mr Jaitley said the matter should not be linked to the polls in Gujarat for Rajya Sabha seats on August 8.

Terming the raids as “political vendetta and witch-hunting”, Mr Kharge accused the government of misusing central probe agencies and said this will “ruin the ethos of democracy”.

“I appeal to the government, not to terrorise and threaten the MLAs. You will also have to face this tomorrow… You are resorting to this to defeat one person (Congress nominee from Gujarat Ahmed Patel) in the Rajya Sabha polls,” Mr Kharge said.

Mr Kumar, who is also from Karnataka, said a penalty of `942 crore had been imposed on the resort by the state government for alleged encroachment.

In Rajya Sabha, Congress leader Anand Sharma questioned the timing of the “targeted” raids, saying that an attempt was being made to “derail and hijack” the Rajya Sabha elections.

Demanding that the Rajya Sabha elections should be held without fear in a free and fair manner, Leader of Opposition Ghulam Nabi Azad said, “In this election (in Gujarat) all these three things are not happening… This is against democracy.”

He also asked why the raids on the Karnataka minister was “taking place today and not a month later or before”.

Not satisfied with Mr Jaitley’s response, an angry Congress, raising slogans, trooped into the well of the House and forced an adjournment for 10 minutes soon after the start of the proceedings. The second adjournment, for another 10 minutes, came during Question Hour and the third one came later and lasted till 2 pm.