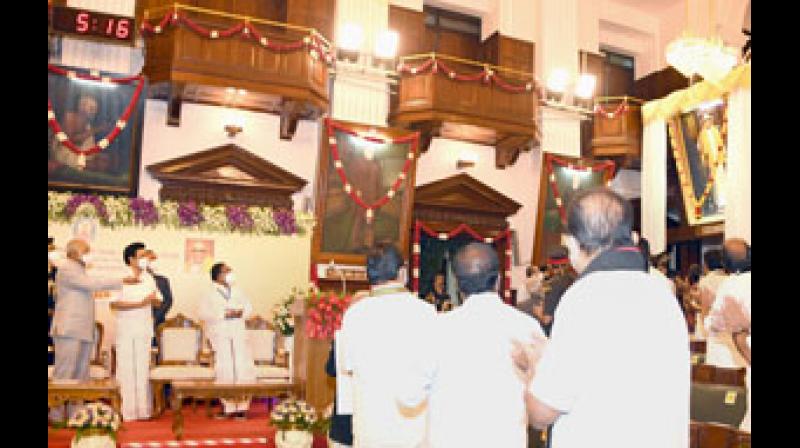 “We will learn both scripture and science. We will explore both the heavens and oceans. We will unravel the mysteries of the moon. And we’ll sweep our streets clean too,” the President said those lines summed up the progressive thinking of the people of the state. — PTI

Chennai:  A colourful portrait of the state’s longest serving Chief Minister M. Karunanidhi standing with his arm resting on an elephant statue was unveiled inside the Assembly Hall in Fort St. George by President Ram Nath Kovind, who said Karunanidhi had ruled the longest period, leaving a ‘defining stamp on Tamil Nadu.’

The event, organised to commemorate the centenary of Madras Legislative Council, was presided over by Governor Banwarilal Purohit with Chief Minister M.K. Stalin and leaders, MPs and MLAs of all major political parties in the state, other than that of the AIADMK, taking part in it.

Recalling the history of the Council, Kovind said it was “a new beginning heralded by the people of the Madras Presidency, which included Tamil Nadu as well as parts of Kerala, Karnataka, Andhra Pradesh, Telangana, Odisha and Lakshadweep.”

He said the Council, which enacted many forward-looking legislations that were subsequently replicated across the country to empower the weaker sections of society and strengthen democracy, sowed the seeds of a fully representative democracy that was realised after Independence.

Crediting it with nurturing the roots of democracy by focusing on governance to uplift the poor and purge social evils, he pointed to some of the revolutionary ideas that transformed society like abolition of Devadasi system, widow remarriage, mid-day meals in schools and distribution of agricultural land to the landless.

“Kalignar started his political career right in his early teenage years when India was still fighting for freedom,” Kovind said, adding “When he breathed his last, he must have been satisfied that his land and its people had made astounding progress and development on all fronts.”

Quoting Tamil poet Subramania Bharati, “We will learn both scripture and science. We will explore both the heavens and oceans. We will unravel the mysteries of the moon. And we’ll sweep our streets clean too,” the President said those lines summed up the progressive thinking of the people of the state.

The Governor, in his address, quoted Thiruvalluvar to describe Karunanidhi eloquence and command over the Tamil language, which even earned praise from his political rivals. He said Karunanidhi was known as ‘Kalignar’ and ‘Muthamil Arignar’ and endeared himself to the people through his speeches.

Karunanidhi served as chief minister for five terms, won all the elections that he contested between 1957 and 2016, entering the Assembly 13 times, Purohit said. He said that he had the privilege of meeting him in 2017 when he accompanied Prime Minister Narendra Modi who had come to visit him.

Narrating an incident that exemplified the political decency of Karunanidhi, the Governor said that when Rajaji was chosen for a freedom fighters award in 1972, he was unable to receive the award personally. So he requested the then chief minister to collect it on his behalf, which Karunanidhi did and presented it to him the next day at his house after personally honouring him with a garland.