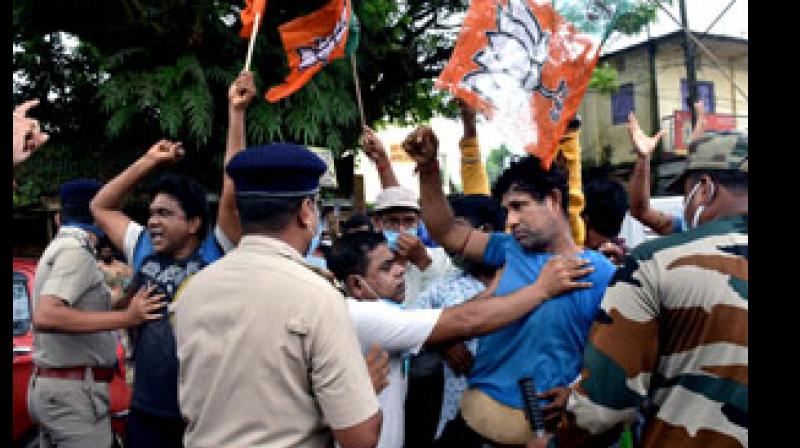 BJP workers also allegedly hit Banerjee’s car with the batons of their party flag but there was no damage to the vehicle. — PTI

Kolkata: West Bengal Chief Minister Mamata Banerjee on Monday declared that “Khela Hobe”, which turned out to be the Assembly poll winning slogan for the Trinamul Congress, would be reverberated across the country soon for its immense popularity, indicating her party’s ambition for a nationwide expansion.

The TMC supremo’s hint came on a day her MP nephew Abhishek Banerjee, however, faced protests while his convoy was attacked allegedly by angry BJP workers during his first visit to Tripura to expand their party’s networks there.

Banerjee, who has already announced ‘Khela Hobe’ Dibas celebration on August 16 every year in the state, pointed out that already the parliament and some other states have witnessed the electrifying call. She was speaking at  launch of ‘Khela Hobe’ programme of her government from Netaji Indoor Stadium.

Banerjee said, “Khela Hobe slogan, even if someone does not admit it, has become very popular. It is raised from the parliament to states like Uttar Pradesh and Rajasthan now. So far Khela (Match) happened to some extent. It will happen again across the country. Life can not be without ‘Khela.’” She also suggested a theme song on ‘Khela Hobe.’

In Tripura, Abhishek Banerjee slammed the state’s Chief Minister Biplab Deb for trying to resus his tour. “Democracy in Tripura under @BJP4India rule! Well done @BjpBiplab for taking the state to new heights,” he tweeted posting a photo and video of the vandalism of one of the cars in his convoy.

The Diamond Harbour MP added, “Today, I visited the Tripureshwari temple. I pray to Maa Tripureshwari for the well-being of everyone in our country. Despite using all his might, @BjpBiplab SHALL NOT be able to stop me from reaching out to the people of #Tripura who deserve to see the light of Democracy!”

However, the BJP workers tried to stop TMC national general secretary Abhishek Banerjee’s convoy multiple times on the way to the Tripureshwari temple from the Agartala airport in Tripura, police sources said.

BJP workers also allegedly hit Banerjee’s car with the batons of their party flag but there was no damage to the vehicle, they said.

A group of BJP workers also tried to stop the convoy at Kamalasagar in the Sipahijala district, raising slogans against Banerjee, police sources said.

As he reached the Tripureshwari temple in Udaipur, a group of BJP workers tried to block his way as they raised “Go back Abhishek” slogans.

The TMC supporters present at the spot also started raising slogans, leading to a heated situation. Following this, Abhishek Debroy, the BJP’s Gomati district president, asked his party supporters to leave the area.

Banerjee then went inside the temple for the rituals, sources said.