The Opposition party condemned it as vendetta politics, while the BJP said the law would take its own course 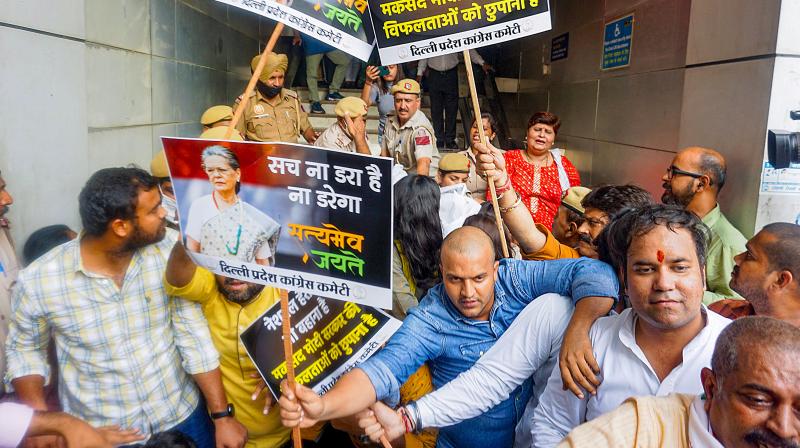 New Delhi: Days after questioning Congress president Sonia Gandhi, the Enforcement Directorate (ED) on Tuesday raided the head office of the Congress-owned National Herald newspaper in the national capital and 11 other locations as parts of its money-laundering investigation. The Opposition party condemned it as “vendetta politics”, while the BJP said the law would take its own course.

The searches are being carried out under the criminal sections of the Prevention of Money Laundering Act (PMLA) to “gather additional evidence with regard to the trail of funds and they are against those entities who were involved in the National Herald-linked transactions”, officials said adding that the action was being undertaken in light of fresh evidence obtained by the ED after the questioning of various people.

“We strongly condemn this vendetta politics against those who speak up against the Modi Govt. You cannot silence us!” he said.

Reacting to Ramesh’s allegation, BJP spokesperson Shehzad Poonawalla asked if the denial of any relief to the Gandhi family by the courts in this matter was also a “vendetta”.

Congress MP Karti Chidambaram claimed that the ED has become a “weapon of mass destruction” and was known as the “hatchet agency” of the government. He made these remarks while hitting out at the BJP government over the ED raids.

Senior Congress politicians Mallikarjun Kharge and Pawan Bansal were also questioned in April by the ED in the same investigation. Kharge said: “I am saying the same thing. This is a politics of vendetta. They should not have done that … just because they want to suppress the voice of the Congress Party and to create an atmosphere of fear… They want to demoralise Congress workers. The Congress people aren’t going to be afraid of these things and they will keep on fighting.”