He also said the decision to scrap high-value currency notes was an attack on the country's poor, farmers, labourers and small shopkeepers 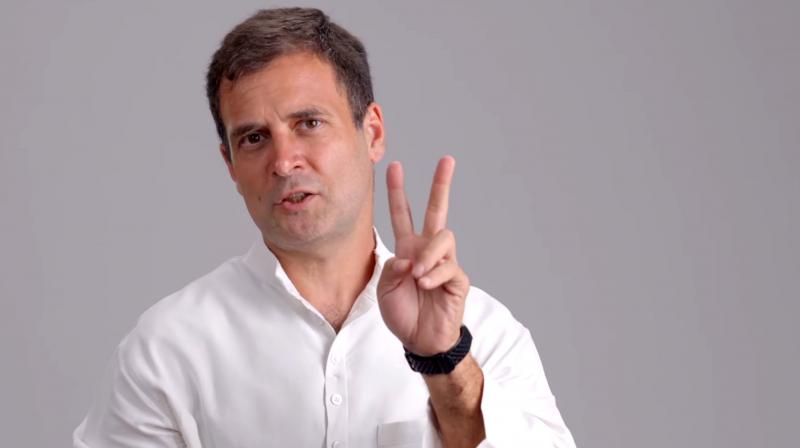 New Delhi: Congress leader Rahul Gandhi on Thursday said demonetisation was an attack on the India's unorganised sector and the country will have to fight it together after recognising it.

He also said the decision to scrap high-value currency notes was an attack on the country's poor, farmers, labourers and small shopkeepers.

Speaking on the economy in the second part of his video series on social media platforms, Gandhi alleged that Prime Minister Narendra Modi wishes to make India a cashless economy while pointing out that the unorganised sector, which comprises the poor, farmers, labourers and small traders, works on cash.

"Demonetisation was an attack on India's poor, its farmers, labourers and small shopkeepers.

"Demonetisation was an attack on India's unorganised economy and we must recognise this attack. The entire country will have to fight against it together," he said.

On November 8, 2016, the prime minister announced demonetisation, making old Rs 500 and Rs 1,000 currency notes useless, and the entire country stood in front of banks to deposit their money and savings.

Gandhi claimed that the move neither erased black money nor did the poor benefit from it.

"So who got the benefit? The advantage was given to India's biggest billionaires. How? The money that you had in your pockets, that you had in your homes was taken away and used by the government to waive the debts of these people," he said, noting that this was just one of the goals.

"The second goal was to wipe out cash from the system. Our informal sector, which is the sector of the unorganised economy, runs on cash. Whether it is a small shopkeeper, farmer or labourer, he or she works with cash.

He said farmers, labourers, small shopkeepers, small and medium businesses, who were dependent on cash, have suffered due to this.

The Congress has stepped up its attack on the government after the country's economy suffered its worst slump on record in April-June, with the gross domestic product (GDP) contracting by 23.9 per cent as the coronavirus-related lockdowns weighed on the already-declining consumer demand and investment.

The GDP contraction in the world's fifth-largest economy compared with a 3.1-per cent growth in the preceding January-March quarter and a 5.2-per cent expansion in the same period a year ago, according to official data released on Monday.