Kovind greeted people on the occasion of Gandhi Jayanti and urged people to imbibe the values he stood for. 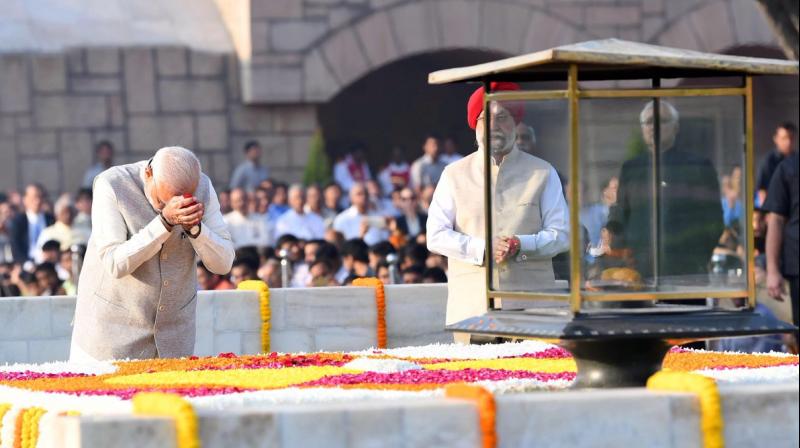 New Delhi: President Ram Nath Kovind and Prime Minister Narendra Modi on Tuesday paid tribute to Mahatma Gandhi at Rajghat on his 149th birth anniversary, urging the people to rededicate themselves to the values espoused by the leader and fulfil his dreams.

Vice-president M. Venkaiah Naidu also paid homage to the Father of the Nation at his iconic memorial here amid the strains of “bhajans”.

United Nations Secretary-General Antonio Guterres also paid tribute to Mahatma Gandhi at his memorial and hailed him as a “great soul” and humanity’s “guide in our troubled world”.

Mr Kovind greeted people on the occasion of Gandhi Jayanti and urged people to imbibe the values he stood for. “Homage to Bapu on #GandhiJayanti. Let us rededicate ourselves to the values espoused by Mahatma Gandhi — peace, fraternity, harmony and inclusive national development. Gandhiji’s message remains relevant for all and he continues to be our guiding light,” the President tweeted.

The President, the vice-president and other dignitaries also visited Vijay Ghat on Tuesday morning to pay tributes to former Prime Minister Lal Bahadur Shastri on his birth anniversary. “Remembering our former Prime Minister Shri Lal Bahadur Shastriji on his birth anniversary. His integrity, wartime leadership and role in the shaping of the Green Revol-ution remains an inspiration for the entire country #PresidentKovind,” Mr Kovind tweeted. The government has planned year long grand celebrations to mark 150th year of Gandhi’s anniversary which would culminate on October 2, 2019.

Mr Guterres, later in an interaction with a news agency, denounced terrorism as a “plague” that affects the world, and highlighted the significance of the principle of non-violence espoused by Gandhi.

“I feel extremely honoured to pay tribute to this great figure in world history. Today (October 2) also marks the International Day of Non-violence. And, as we continue our work to advance peace, the way to realise the objectives is through non-violence,” he said.

Mr Guterres, currently on a visit to India, his first as the UN Secretary-General, also laid a wreath on the “samadhi” of the Father of the Nation at Rajghat.