Punjab and Goa polls, which will be followed by those in UP, Uttarakhand and Manipur, are being billed as a test for Modi post-note ban. 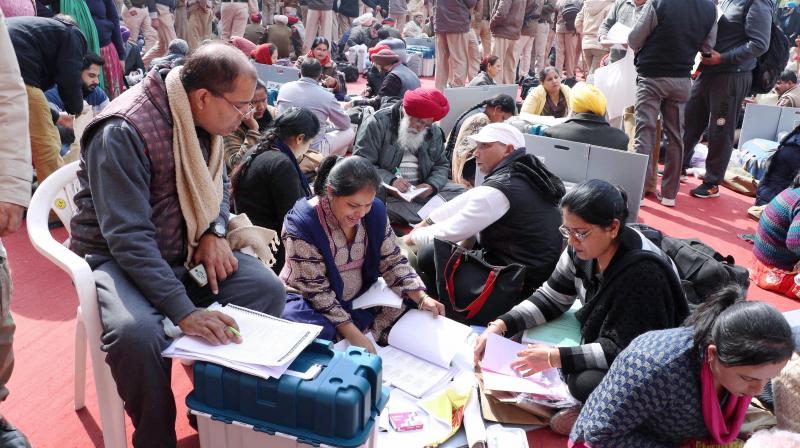 Chandigarh/Panaji: Voting for Goa and Punjab legislative Assembly elections began on Saturday where archrivals BJP and Congress battle it out in the electoral arena, with Arvind Kejriwal's AAP, debuting in Assembly elections in the two states seeking to play a spoilsport for the two major contenders to power.

BJP is in government in Punjab in alliance with Shiromani Akali Dal (SAD) for two successive terms, while it also helms Goa, despite ally Maharashtrawadi Gomantak Party having drifted away just after the announcement of elections to form a three-party combine. 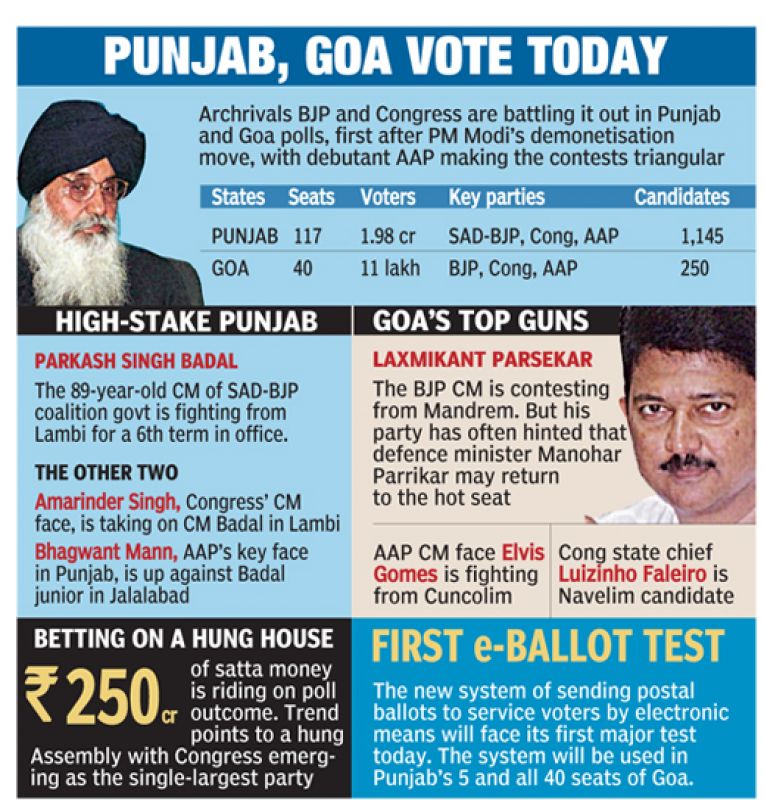 The elections to Punjab and Goa, which will be followed by those in Uttar Pradesh, Uttarakhand and Manipur, beginning later this month and spilling over to March, are being billed as a major test of BJP and Prime Minister Narendra Modi's popularity post-demonetisation.

Brisk polling was going on as around 66 per cent of the total 1.98 crore electors exercised their franchise till 4 pm in the high-stakes Punjab Assembly elections, wherein 1,145 candidates are in the fray.

"Polling is going peacefully," Additional Director General of Police (ADGP-elections) V K Bhawra said. Meanwhile, a technical snag was reported in voter-verified paper audit trail (VVPAT) machines in Majitha and Sangrur, the spokesman said, adding that the matter had been referred to the Election Commission.

The polling started around 45 minutes late at two polling booths in Jalandhar and Amritsar due to technical glitch in the Electronic Voting Machines (EVMs).

The polling for 117 Punjab assembly seats is taking place amid tight security.

Shiromani Akali Dal (SAD) has fielded candidates in 94 seats, while its ally BJP has nominated candidates in the remaining 23 seats. Congress is contesting alone on all seats.

AAP, which is contesting the state polls for the first time, has fielded candidates in 112 seats, while its ally Lok Insaf Party, led by Ludhiana-based Bains brothers, has fielded nominees in five seats.

Over 200 companies of paramilitary forces have been deputed for the fair conduct of polls. Voting for Amritsar Lok Sabha seat by-poll is also being held amid tight security arrangements.

The total number of electors in the state is 1,98,79,069, including 93,75,546 females. There are 415 transgender voters. The total number of candidates in the fray include 81 women and a transgender. The polling commenced at 22,615 polling stations in the entire state. While 84 Assembly seats are of general category, 34 are reserved.

Prominent among the candidates in fray for the Lok Sabha seat are BJP leader Rajinder Mohan Singh Chhina, who is up against Congress' Gurjit Singh Aujla and Aam Aadmi Party's Upkar Singh Sandhu.

Punjab Chief Minister Parkash Singh Badal cast his vote at around 10:50 AM in his home constituency Lambi. Deputy Chief Minister Sukhbir Singh Badal and his wife and Union Minister Harsimrat Kaur Badal also cast their votes in the Assembly polls before 11 AM.

The counting of votes for the state polls will take place on March 11.

A high voter turnout of over 83 percent was on Saturday recorded in the Assembly polls in Goa, where the ruling BJP is engaged in a fierce fight with the Opposition Congress, AAP and an alliance of MGP, Shiv Sena and GSM for the 40-member House.

Long queues were seen outside almost all the polling stations in the state with estimates of more than 40 per cent voters going to vote before lunch.

Except for minor incidents of EVM failures which was rectified later on, polling has remained peaceful across the state.

More than eleven lakh voters are eligible to exercise their right in this election which has 250 candidates in fray. Voting is being held across 1,642 polling booths in the state with para-military forces and State police guarding the venues.

The election is being closely fought by major political forces - BJP, Congress, AAP and MGP-led alliance, who have been campaigning in the coastal state for last two months.

Though 2012 Goa Assembly elections witnessed satisfactory 83 per cent voting, the election commission officials in Goa ran an awareness campaign for voters in order to increase the bar. Various icons from different fields were engaged to spread message about ethical voting by the commission which had strict vigilance on casinos, matka gambling, unorganized vendors and other activities to avoid money and muscle power from influencing the voters.

For the polls underway, AAP is contesting on 39 seats, Congress on 37 and BJP on 36 seats.

BJP which had pre-poll alliance in 2012 elections is going alone this time but is supporting independents in four constituencies.