He said because of the Shaheen Bagh protests, people commuting to and from Noida had been facing a lot of problems. 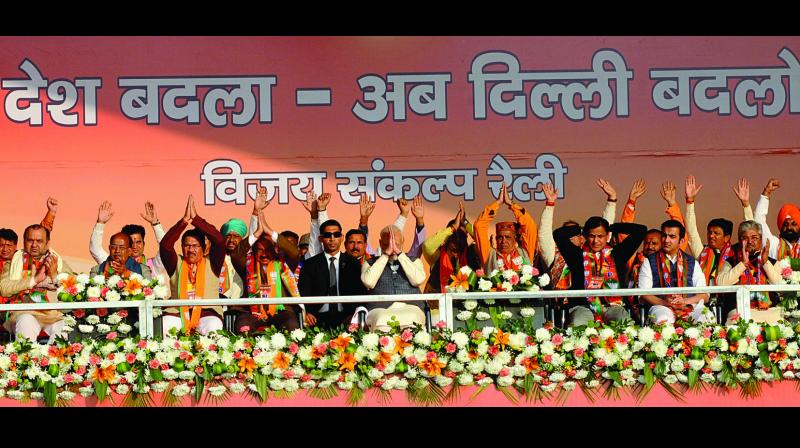 Prime Minister Narendra Modi with all 20 candidates from East and North-East Delhi seats during a rally at Karkardooma ground in New Delhi on Monday. (Photo: G.N. JHA)

New Delhi: Accusing the AAP and Congress of fuelling the anti-CAA demonstrations, Prime Minister Narendra Modi said on Monday that the protests in Delhi’s Seelampur, Jamia Nagar and Shaheen Bagh were not a coincidence, but a “political design aimed at harming the harmony of the country”.

Addressing a rally at Karkardooma in East Delhi, Mr Modi alleged that the AAP and Congress were provoking people and misinforming them. “They are keeping the Constitution and the tricolour in the forefront, but the aim was to “divert attention from the real conspiracy”, he said, ahead of Delhi’s Assembly elections on February 8. Mr Modi will address another rally on Tuesday in Dwarka.

The PM said the protesters were trying to disrupt social harmony, and if they were not stopped in Delhi they would block some other road in some other part of the country. He said because of the Shaheen Bagh protests, people commuting to and from Noida had been facing a lot of problems.

Making a fervent appeal to people to vote for the BJP, Mr Modi said: “Vote for change in Delhi, it will strengthen the BJP. People are facing problems because of these protests, they are silent but angry with votebank politics. It is votebank politics in Seelampur, Jamia and Shaheen Bagh over protests on the CAA. It is not a coincidence, but an experiment. They hold the Constitution and the national flag to divert attention from the real conspiracy and (to hide) their intentions.”

Mr Modi said if there was any confusion over a law, the protest should have ended after the government’s assurances. “But the Aam Aadmi Party and the Congress are playing the game of politics,” he said. In a swipe at the Congress, the PM said those who had questioned the Batla House encounter were saving those who had raised the “tukde tukde” slogan.

The protest at Shaheen Bagh, led by women, has been going on for over 50 days. The protest has led to the closure of a key road (No. 13A) which connects Delhi to Noida. The administration as well as locals have urged the protesters to clear the road so that commuters don’t face inconvenience, but they ignored all requests.

Earlier in the day, Delhi chief minister Arvind Kejriwal said the BJP was trying to benefit from the protest at Shaheen Bagh, and if Mr  Shah wanted, he could get the route opened in “two minutes”. “The road must be vacated. This issue is under the Central government and I don’t know why it is not opening that road. They don’t want to open it. The BJP is doing politics on this. Can’t believe a powerful home minister as Amit Shah can’t get that road opened. If the road is opened, there won’t be an issue left for them,” he said at a show by a news channel.

“Kejriwal Sir, you hide the manifesto, but we and the people of Delhi will not stop asking questions,” he said, adding that the BJP fulfills all its promises.

The PM said the vote to be held on February 8 will not be just to form the government in Delhi, but to take the city’s development “to new heights in this decade”.

Stating that only the BJP can take Delhi to new heights, Mr Modi said: “The BJP does what it says. Our priority is to fulfil the people’s aspirations and work in their favour. We believe in positivity and not in negativity.” He added that the national capital is India’s heritage as it represents ‘unity in diversity’.”

Listing his government’s achievements, the PM cited the revocation of Article 370, the Supreme Court’s Ayodhya verdict, the Kartarpur Corridor opening and the CAA for persecuted minorities.