Mamata accused Rajib Banerjee of malpractice, during his tenure as the state forest minister, which has come under a probe of her govt 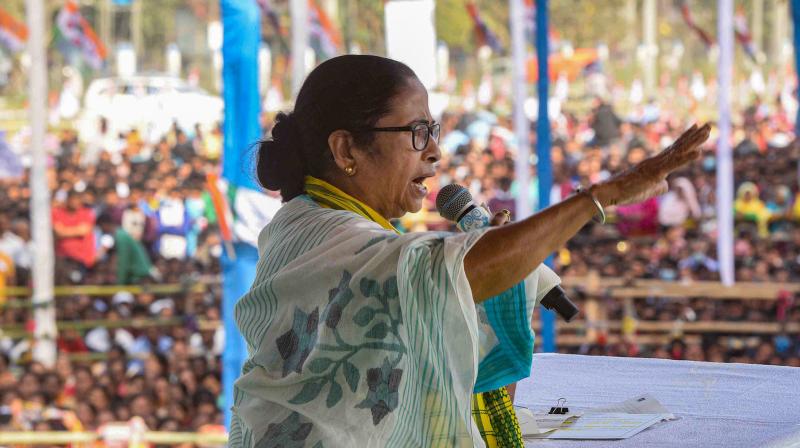 Mamata Banerjee on Wednesday indicated that the polls would be announced within a week in the state. (Photo:PTI)

Kolkata: Triggering speculation of an early Assembly Election in West Bengal, chief minister and Trinamul Congress supremo Mamata Banerjee on Wednesday indicated that the polls would be announced within a week in the state.

She also accused TMC turncoat, Rajib Banerjee of malpractice, during his tenure as the state forest minister, which has come under a probe of her government. Hitting back at her within few hours, Rajib Banerjee, however, gave himself a clean chit and punctured her claims.

Addressing a TMC rally in Alipurduar of North Bengal, the CM said, "Remember, only seven-eight days are left for the polls to be announced. So time is less in hands."

Without taking the name of Rajib Banerjee she alleged, "The boy who was with us but left us did some anomalies in the appointments of Bon Sahayak (Forest Assistant). Lot of people gave me this complaint. We are investigating it. One should ask him about his role in such malpractice when he makes tall talks. He joined the BJP after stealing."

Stumping the TMC chief, Rajib Banerjee said at a BJP rally in Gurap of Hooghly, "She claimed of anomalies in the recruitment of Bon Sahayak and talked of a probe. But with due respect to her, I can say with responsibility that I had impartially entrusted a panel for the recruitment with transparency. At around 10 am on October 8, when I sent her a message complaining against a bigshot of Birbhum of threatening me to allot all the Bon Sahayak jobs to him, she called me to distribute the jobs proportionately in quota among the TMC workers in all the districts."

He told the CM, "I remained silent so far. But you forced me to open my mouth. I still have the messages and copies of recommendations from Kalighat and ministers and leaders. You are only opening a can of worms. You are now in Alipurduar where your district party president was among those who made the recommendations. You rather cancel the panel of recruitment to know the truth. If needed, cancel all the government recruitment for contractual jobs. But can you do it?"