Tata Sky CEO Nagpal said channel 'does not fall into any genre' and feed is 'coming from the BJP via Internet'. 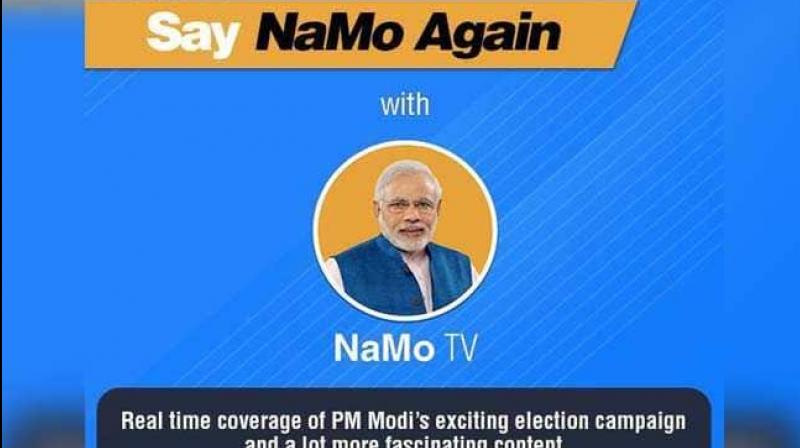 The channel was launched on March 31 and was promoted by the BJP as well as the related accounts. (Photo: Twitter | Narendra Modi)

New Delhi: DTH service provider Tata Sky on Thursday clarified that NaMo TV is “not a Hindi news service” but a special service via internet that doesn’t need a government license.

Harit Nagpal, CEO of Tata Sky said, “NaMo TV is not a Hindi News service. If someone in the frontline at Tata Sky has tweeted or said that it is a news service, it is a mistake”.

Nagpal said the channel “does not fall into any genre and the feed is “coming from the BJP via Internet”.

Earlier, Tata Sky had tweeted that the channel is a “Hindi news service which provides the latest breaking news on national politics”.

Tata Sky also revealed that the channel “is added to all subscribers as a launch offer” and there is “no option to delete the individual channel”.

Channel no 512 is NAMO TV, it is a Hindi news service which provides the latest breaking news on national politics ^Rudra

Amid opposition allegations that BJP has violated the model code of conduct, the Election Commission has asked for a report on the channel from the Information and Broadcasting Ministry.

NaMo TV has PM’s initials and his image as its logo is available on various DTH and cable TV platforms. It has been airing PM Modi’s speeches and interviews of BJP leaders. However, it is not clear who owns the channel or how it is funded.

The channel was launched on March 31 and was promoted by the BJP as well as the related accounts.

After the launch, PM Modi tweeted urging the citizens to watch his interaction with other leaders live on the channel.

The day we were most looking forward to is here!

At 5 PM, lakhs of Chowkidars from different parts of India will interact in the historic #MainBhiChowkidar programme.

This is an interaction you must not miss.

Watch it live on the NaMoApp or NaMo TV. pic.twitter.com/XXKkLUuE7X

Top sources in Information and Broadcasting ministry said that the channel is an “advertising platform” that doesn’t need the government’s approval for telecast. DTH service provider Tata Sky tweets contradict the claim.

Sources also said NaMo TV "is not a normal channel" and does not figure in the official list of approved channels of the ministry.

Questioning about NaMo TV, Union Finance Minister Arun jaitley said that let the appropriate authorities answer. “Let the Information and Broadcasting and EC (Election Commission) comment on it. You and I should not get into it," Jaitley added.

Both the Congress and the Aam Aadmi Party (AAP) have complained to the Election Commission against the channel.

The model code of conduct came into effect on March 10 after the Election Commission announced seven-phase elections from April 11 to May 19. Counting of votes will take place on May 23.