PM Modi has only "television", no vision: Priyanka Chaturvedi

It was Indira Gandhi who demonstrated with courage how to strike right inside the enemy's house,"Chaturvedi said. 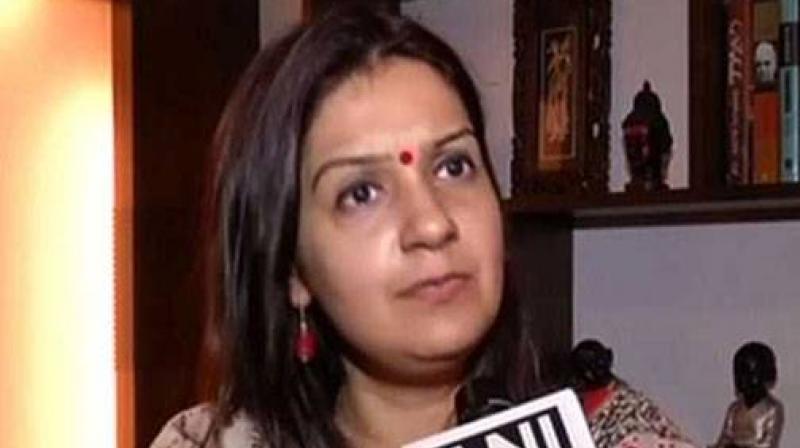 Criticising the GST and demonetisation for their "disastrous" impact, Priyanka Chaturvedi said the Congress will simplify the new indirect tax, if voted to power. (Photo: PTI)

Bhubaneswar: The Congress on Thursday mocked the BJP-led government, saying its "dismal" performance bore testimony of the fact that Prime Minister Narendra Modi has only "television" instead of vision. The Rahul Gandhi-led party also slammed the BJP for criticising its manifesto, noting that the central government had no right to preach on national security, as the country saw a "260 per cent" rise in terror-related incidents during the last five years. "The dismal performance of his government shows Modi has no vision and only television," Congress spokesperson Priyanka Chaturvedi told reporters.

She alleged that the rich became richer and the poor turned poorer under the BJP rule, but Congress' election manifesto talks about giving justice to the farmers, women, youth, and the jobless and distressed sections. Accusing the BJP of not fulfilling promises made in its manifesto in 2014, she said the saffron party had assured to provide 33 per cent quota for women, double farmers' income and create two crore jobs annually, but failed "miserably" to meet any of these.

Mounting a scathing attack on the BJP for making tall claims about nationalism, the Congress leader said never before in the history of India did any prime minister visit Pakistan "uninvited". However, "Modi went there uninvited, had biriyani, and got the Pathankot (terror strike) in return," she said, adding, even Pakistan's ISI was allowed to investigate into the incident. "No one knows what happened to that investigation," Chaturvedi said.

Hitting out at the central government for the Pulwama attack in which 40 CRPF personnel were killed, she said it was the "biggest intelligence failure". "National Security Advisor (NSA) Ajt Doval, who was instrumental in the release of Jaish-e-Mohammed chief Masood Azhar, had held talks with Pakistani officials in Bangkok, which is deplorable," the Congress leader said. "Let them (the BJP) not try to teach us on nationalism. It was Indira Gandhi who demonstrated with courage how to strike right inside the enemy's house," she said.

Dubbing the BJP as a symbol of "hypocrisy", Chaturvedi said the saffron leaders' attack on Congress over the Armed Forces (Special Powers) Act was meaningless, and made it clear that her party only seeks to review and hold dialogues before taking any step on the AFSPA, and not dilute it.

The AFSPA was revoked in three districts of Arunachal Pradesh and some north-eastern states during the BJP-led NDA government, she said, accusing the party of adopting double standards on the issue. Chaturvedi further alleged that the BJP had promised withdrawal of the AFSPA for entering into an alliance with the PDP in Jammu and Kashmir. Criticising the GST and demonetisation for their "disastrous" impact, she said the Congress will simplify the new indirect tax, if voted to power.