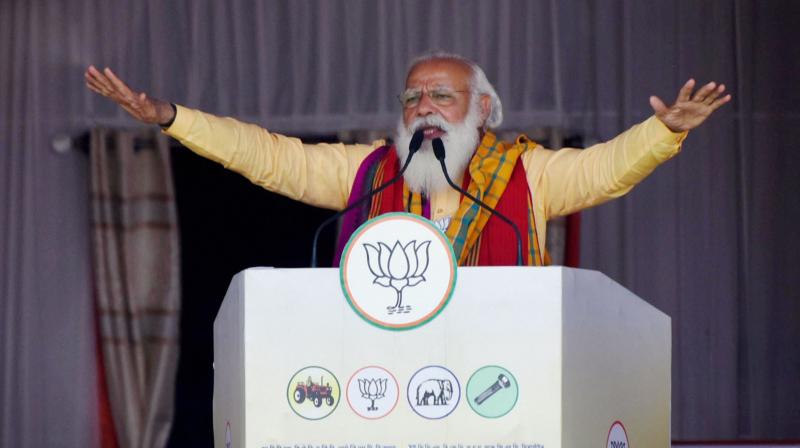 Guwahati: Prime Minister Narendra Modi on Saturday appealed to militants who are still on the path of violence to lay down their arms and join the mainstream in order to build a peaceful and ‘Aatmanirbhar’ Assam.

Addressing his last public rally before the third and final phase of polling in Assam at Tamulpur, Modi said, “I assure our mothers and sisters here that your children will not have to carry guns, they do not have to spend their lives in jungles, they do not have to fall prey to anyone’s bullet. This is the commitment of the NDA government which will tirelessly work for development and prosperity of the state.”

Mr Modi said, “The people of Assam are with vikas, stability, peace, brotherhood and unity. The people of Assam couldn’t tolerate those who don’t give due respect to the Assamese pride and identity. In the last five years, the NDA’s double engine government has given double benefits to the people.”

Pointing out to mega-development projects completed by the BJP-led alliance government, Prime Minister said, “In the last five years, Bhupen Hazarika Setu, Bogibeel Bridge were built. Besides, construction work of half a dozen bridges are going on in the state. Whenever we make a scheme, we want that the benefits of schemes to reach every section of the society. Our mantra is ‘sabka saath, sabka vikas, sabka vishwas.”

Alleging that the bogey of secular politics has done immense damage to the nation, he said, “We work for everyone without discrimination but some people divide the country for vote bank, which is unfortunately called secularism. But if we work for everyone, it’s called communal. Games of secularism, communalism have caused great damage to the country.”

He went on to say, “We work for the people, we work with honesty. Everybody got pakka houses, everyone got toilets, everyone got gas connection without any bias. Our principle is to provide everything to everyone.”

He further said, “We have worked and already resolved many long-standing problems and we will continue to find solutions for all other issues. Assam has a lot of opportunities to become a ‘Tourism Hub’ which can generate  huge employment in the state.”

527 fishing boats back to shores before Cyclone Jawad