This didn't go down well with Cong candidate Pramod Krishnan, who took strong exception to leader from his own party canvassing for rival. 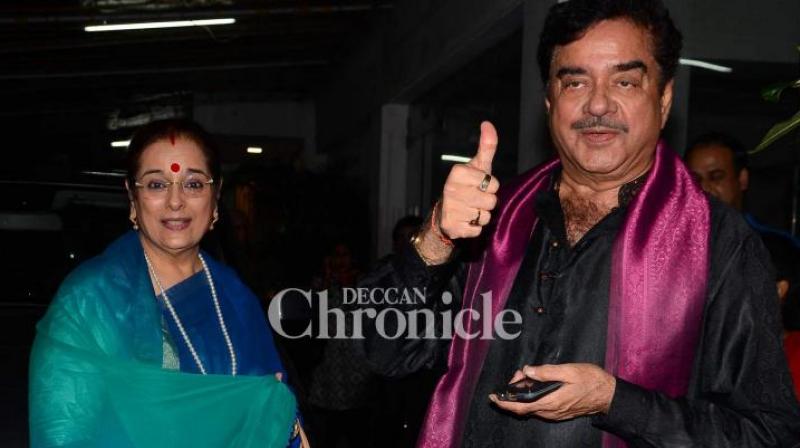 Patna Sahib's Congress candidate Shatrughan Sinha on Saturday said just as he stood by his wife and rival Samajwadi Party nominee from Lucknow, Poonam Sinha will discharge her 'patni dharma' and accompany him to his constituency later this month. (Photo: File)

Lucknow: Patna Sahib's Congress candidate Shatrughan Sinha on Saturday said just as he stood by his wife and rival Samajwadi Party nominee from Lucknow, Poonam Sinha will discharge her 'patni dharma' and accompany him to his constituency later this month.

"I have done my ‘pati dharma' (duty as a husband), she will also play her `patni dharma' once polling in Lucknow is over," the actor-turned-politician known for his one-liners told PTI in an interview.

While polling in Lucknow is on May 6, it will take place in Patna Sahib on May 19, the last phase of the elections.

Though contesting from a rival party, Shatrughan Sinha was present along with Poonam Sinha when she filed her nomination papers as an SP candidate and held a roadshow in Lucknow.

This did not gone down well with Congress candidate Pramod Krishnan, who took strong exception to a leader from his own party canvassing for a rival.

Pramod Krishnan tweeted his displeasure after Sinha attended an election meeting here on Thursday with SP president Akhilesh Yadav. "From Shatrughan Sinha's behaviour, it appears that though he has joined the Congress he has not yet resigned from the RSS."

When asked about this, Sinha said he was never part of that organisation. "Only I and Yashwant Sinha have never been in the RSS," he said, referring to another leader, also seen once as a rebel within the Bharatiya Janata Party.

"It is another thing that I was brought into the BJP by Nanaji Deskhmukh which is just as important," he said.

Sinha quit the party recently and joined the Congress to contest from Bihar's Patna Sahib, the seat he held as a BJP MP. He faces Union minister Ravi Shankar Prasad as his BJP rival this time.

On the possible outcome of these elections, Sinha said the “one-man show' and the “two-man army” will not return. The 72 year-old quit the BJP after being sidelined for years.

His exit from the BJP was precipitated by that party's announcement that Ravi Shankar Prasad will contest from Patna Sahib, the seat Sinha won in 2009 and 2014.

In the build-up to the inevitable breakup, Sinha needled his party bosses repeatedly on Twitter.