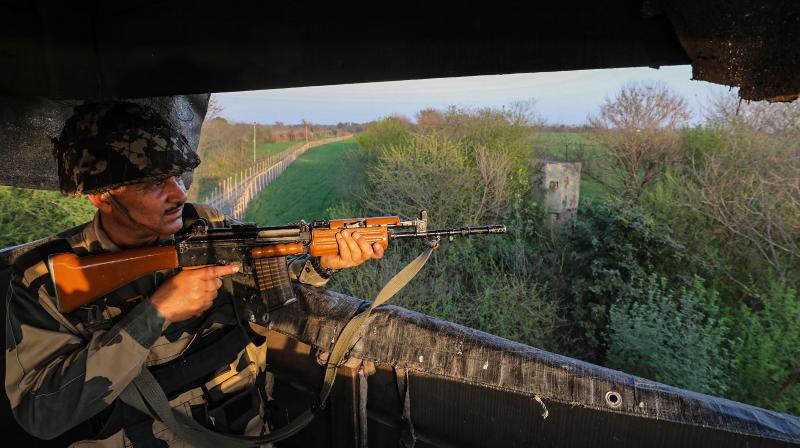 Their pledge to abide by the November 2003 ceasefire understanding had been welcomed by the United Nations Secretary General, the United States and several other countries whereas it brought smiles on the faces of the border residents who had suffered immensely due to unending military tensions. — PTI

SRINAGAR: Pakistan’s border guards on Monday violated the ceasefire agreement between the two sides by resorting to “unprovoked” cross-border firing in Jammu and Kashmir’s Samba district, the Border Security Force (BSF) which acts as the ‘first line of defence’ along the stretch of the International Border (IB), alleged.

It said that its men retaliated to the ceasefire violation “in a big way”, adding that no one was killed or injured in the exchange of fire on the Indian side. Pakistan had not reacted to the charge till filing of this report.

BSF Deputy Inspector General (DIG), SPS Sandhu, claimed that Pakistan’s Punjab Rangers targeted a patrolling team of the BSF in Ramgarh sector of the IB in Samba at around 6.15 am. “We quickly retaliated in a big way,” he said.

This 198-km stretch of the international border between India and Pakistan is called ‘Working Boundary’ in Pakistan but often referred to as ‘Sialkot-Jammu border’ in public parlance on both sides of the divide line.

The reported Pakistani firing in Ramgarh sector is the first such incident that has taken place after the military leaderships of the two countries had on February 25 this year announced that the two armies had begun observing a ceasefire along the borders in J&K from the midnight of February 24.

India’s Director General of Military Operations (DGMO) Lt. Gen. Paramjit Singh Sangha and his Pakistani counterpart Major General Nauman Zakaria had earlier on February 22 held a discussion to review the situation along the Line of Control (LoC) and all other sectors in a “free, frank and cordial atmosphere” over their established telephone hotline.

Their pledge to abide by the November 2003 ceasefire understanding had been welcomed by the United Nations Secretary General, the United States and several other countries whereas it brought smiles on the faces of the border residents who had suffered immensely due to unending military tensions and frequent bouts of skirmishes between the facing troops across the divide line over the years.

Senior journalist and political analyst Arun Joshi said that though Pakistan has yet to react to the Indian allegation, it has to explain its position in the interest of peace and ensure the backchannel talks between the two countries which have led to some melting of the ice and are believed to had worked towards their military leaderships’ renewing the ceasefire pledge more than two months ago are not spoiled. He also said, "Today's reported incident can bring back the fear that had engulfed the border residents prior to the February 25 announcement. Therefore, the two sides should ensure today's incident remains restricted to what has already happened and is not allowed to spread out."