Opposition in Bihar claims of strain ties between BJP, JD(U)

Bihar's main opposition party RJD has alleged that the current situation reaffirms that the public has been cheated. 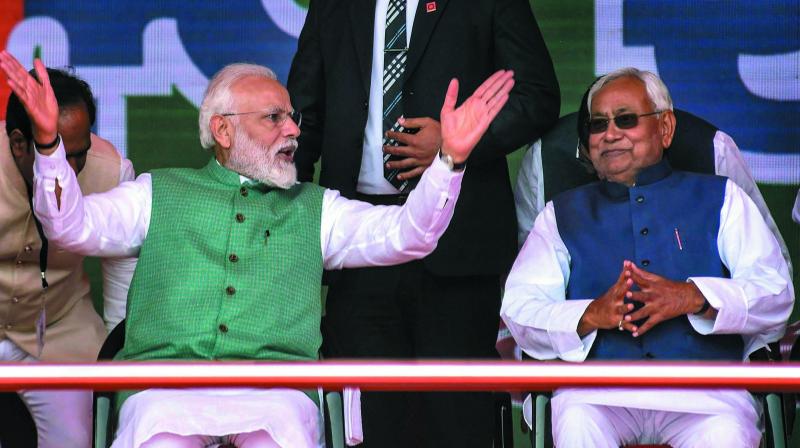 The JD(U) on May 30 decided to not be a part of Prime Minister Modi's new ministry, rejecting the BJP's offer of only one ministerial berth. (Photo: File)

New Delhi: Reports of strained ties between Bharatiya Janata Party and Janata Dal-United (JDU) has raised the political temperature in Bihar with key opposition parties uniting in lashing out at the two parties.

Bihar's main opposition party RJD has alleged that the current situation reaffirms that the public has been cheated.

Congress leader Tariq Anwar outlined JD(U)'s missing representation from the Union Cabinet to assert that everything doesn't seem right between the two parties.

"Nitish Kumar is teaching BJP a lesson. He refused its offer of giving one cabinet birth in Central cabinet to JD(U) and later expanded the Bihar cabinet by completely sidelining the BJP legislators. This makes it evident that not everything is right between two alliance partners and in coming times Nitish Kumar can create problems for BJP. He has already hinted that he has other options", said Anwar.

Previously, RLSP leader Upendra Kushwaha had taken a jibe at the JD(U)-BJP alliance by stating that BJP must be ready for a 'second betrayal' from Nitish Kumar.

However, JD(U) has already refuted claims of having a strained relationship with BJP.

The JD(U) on May 30 decided to not be a part of Prime Minister Modi's new ministry, rejecting the BJP's offer of only one ministerial berth.

"BJP wanted only one person from the JD(U) in the Cabinet. It would have been just symbolic participation. We informed them that we do not need the Cabinet berth," Chief Minister Kumar had said.

The JD(U) chief, who later attended Modi's swearing-in ceremony on May 30, had said, "It is not a big issue. We are in the NDA and are not upset at all. We are working together. There is no confusion."

The "iftar" parties in Bihar have gained traction this year after JD(U) refused to be a part of Union Cabinet. However, Nitish Kumar has repeatedly denied any misunderstanding between the NDA allies.

NDA made a clean sweep in the state in the recently held Lok Sabha polls by winning 39 out of the 40 seats at stake.