‘Would be better if they organised Navratri celebration’: Giriraj takes a jibe at LJP, JD(U) 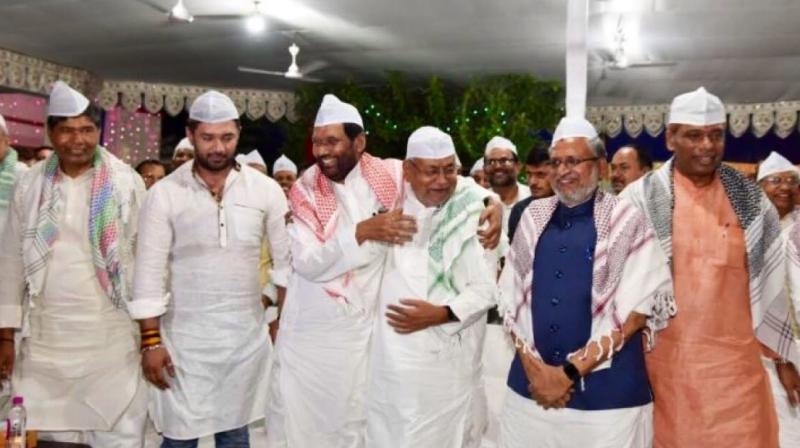 ‘Why do we fall behind when it comes to our own practices and religion and ahead in showoff?’ Union Minister leader Giriraj Singh said. (Photo: Twitter | @girirajsinghbjp)

New Delhi: Union Minister leader Giriraj Singh on Tuesday took a jibe at BJP allies -Janata Dal-United and Lok Janshakti Party - for hosting Iftar parties and said it would be better if they organised such gatherings during Navratri.

Singh's Hindi tweet roughly translates to, "How beautiful the pictures would have been if fruit only feasts were organised during Navratri with similar affection? Why do we fall behind when it comes to our own practices and religion and ahead in showoff?"

Singh's sharp attack comes days after Kumar's JD(U)'s opted out of the BJP-led central Cabinet citing lack of "proportionate representation" being offered to the NDA allies.

Soon after, in the expansion of Bihar Cabinet only JD(U) MLAs were inducted in the vacant berths.

In a sharp retort, JD(U)'s Ashok Chaudhary dubbed Singh as a "hard Hindutva leader'' and said he should not be taken seriously.

"Giriraj Singh shouldn't be taken much seriously as he tries to portray himself as a hard Hindutva leader. We don't know what he has in mind, but his tongue is only for hard Hindutva," Chaudhary told reporters here.

He also warned Singh and urged him to refrain from commenting against the Bihar Chief Minister.

"Giriraj Singh should restrain himself from using these words against Nitish Kumar. This is a government of 'gathbandhan' and all the coalition leaders helped him win by four lakh votes from his seat (Begusarai)," Chaudhary said.

Even the presence of prominent BJP leaders from Bihar could not dissuade Singh from taking a swipe at the allies.

Shah called up and asked Singh to refrain from making such statements, sources told ANI.