The leader said the relief was granted on the directions of party chief Akhilesh Yadav. 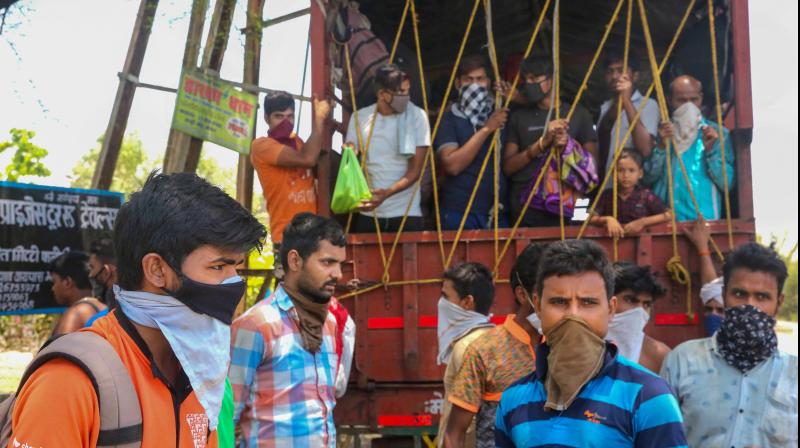 Lucknow: The Samajwadi Party has so far distributed around Rs 50 lakh to guest workers and their families as financial assistance, including Rs one lakh each to the next of the kin of workers who died in Uttar Pradesh due to various reasons, a senior party leader said.

The leader said the relief was granted on the directions of party chief Akhilesh Yadav.  "SP chief Akhileshji has announced Rs 1 lakh to families of those guest workers who died in the state due to mishap or other reasons. The party has so far given about Rs 50 lakh to 47 people," the SP leader said.

The list of beneficiaries included family of journalist Pankaj Kulshresth who died due to coronavirus in Agra. Besides, the party provided financial assistance of Rs 1 lakh to Jyoti Kumari, who cycled almost 1,200 km to Darbhanga in Bihar from Gurgaon carrying her injured father on pillion.

"An amount of Rs 1 lakh was transferred into the account of Phulo Devi, the mother of Jyoti Kumari, by the party," he said.

Saluting the courage of the 15-year-old, Akhilesh Yadav had on May 21 announced Rs 1 lakh assistance for her.

In Lalitpur, a pregnant migrant labourer, Rajabeti, gave birth to a girl child before reaching her village Barkhiria.

"As the news became viral on media, the party chief sent a local worker and ensured immediate assistance to her family. When, he later came to know about birth of the girl child, he sent Rs one lakh assistance for the girl's future," the party leader said.

Besides them, in cases of deaths due to mishap or other reasons, the party provided one lakh each in various districts including Agra, Bhadohi, Kushinagar, Muzaffar Nagar, Ghazipur, Unnao, Gonda, Hardoi, Etawah, Mahoba, Hardoi, Pratapgarh, Lakhimpur Kheri, Allahabad, Jaunpur, Azamgarh, Deoria, Basti, Fatehpur and Sant Kabir Nagar, the list said.

When asked, Akhilesh Yadav told PTI, "We are doing whatever we can to provide help to the migrants and common man in this coronavirus pandemic. Party workers and leaders are helping people on their own and the list is vast."

In Baharaich, a financial assistance of Rs 50,000 was provided for family of a baby boy named ''Border'' who was born in the no man''s land between India and Nepal.

The money was provided to the newborn''s family residing in Prithvipura village in Motipur tehsil.

A woman named Jantara had given birth to the child in the no man''s land between India and Nepal following which the family named her child ''Border''.