Leader of legislature wing of AIADMK A Anbalagan, urged Centre to recall Bedi as her remarks were ‘highly derogatory and demeaning.’ 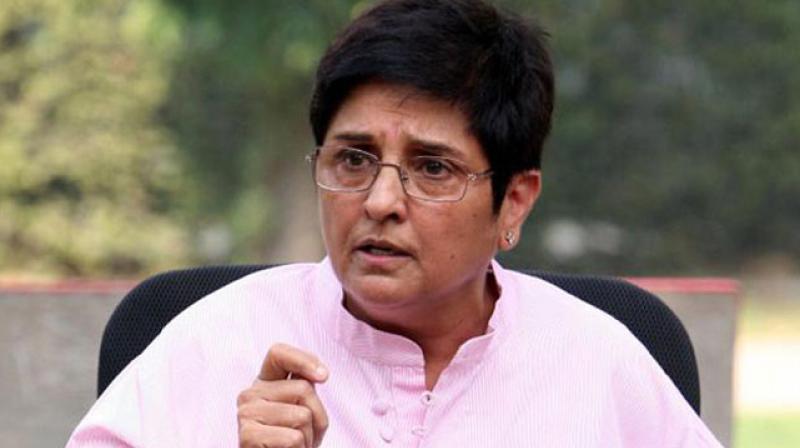 Agitators raised slogans against Bedi for her ‘unjustified and unwarranted comments against Tamil Nadu government and the people of the State.’ (Photo: PTI | File)

Puducherry: AIADMK workers staged a protest in Puducherry on Thursday against the recent comments made by Lt Governor Kiran Bedi on the Tamil Nadu government and the people in the context of the water scarcity in Chennai.

Leader of the legislature wing of AIADMK A Anbalagan, who led the demonstration, urged the Centre to recall Bedi from Puducherry as her remarks were "highly derogatory and demeaning."

Agitators raised slogans against Bedi for her "unjustified and unwarranted comments against Tamil Nadu government and the people of the State."

Anbalagan alleged that the development activities in Puducherry had come to a standstill with Bedi locking horns with the Narayanasamy-led Congress government here during the last three years.

Hitting out at the Lt Governor over her remarks, the AIADMK leader said, "Bedi has no locus standi to make any comments on the politicians, bureaucracy and the people of Tamil Nadu in the context of the water crisis` he said and asked Bedi to hold her tongue."

"If late Chief Minister Jayalalithaa were alive would Bedi have made such derorgatory statements against the Tamil Nadu government and the people?" he asked and urged Bedi to withdraw her comments and tender an apology to the people.

The Lt Governor, referring to a media report on the water situation in Chennai, had said that the city has become the first in the country to run dry four years after it witnessed floods due to copious rains.

The people's perception, in response to the report, was that the situation arose due to "poor governance, corrupt politics and indifferent bureaucracy," she had said.

Later, she said she had shared only the people's perception. "It is not my personal view and hence there is nothing personal in the message," she added.