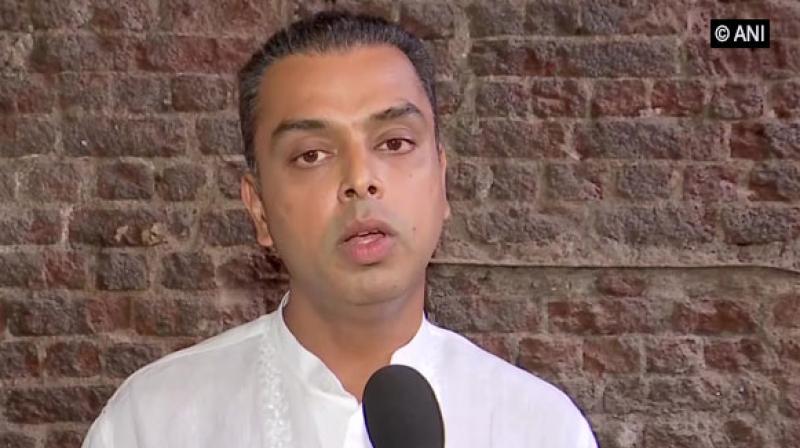 Deora said, 'Shri Rahul Gandhi never hesitated to lead from the front. We respect his decision to resign from the post of Congress President. In order to revive, Congress must now expedite the process of selecting an able successor.' (Photo: ANI)

Mumbai: Mumbai Congress president Milind Deora on Wednesday appeared to be supporting Rahul Gandhi's idea of electing next successor to lead the party saying, "Congress must now expedite the process of selecting an able successor."

Taking to Twitter, Deora said, "Shri Rahul Gandhi never hesitated to lead from the front. @INCIndia appreciates & values his idealism & courage.
We respect his decision to resign from the post of Congress President. In order to revive, Congress must now expedite the process of selecting an able successor."

The statement from Milind Deora came just hours after Gandhi scion posted a four-page letter on the social media and stated that he had urged the Congress Working Committee (CWC) to constitute a group of people that could find his successor and distanced himself from the process of selecting the next president.

Gandhi in the letter also admitted that he is responsible for the Lok Sabha debacle and is not in a position to elect the new chief.

"As President of the Congress Party, I am responsible for the loss of the 2019 election. Accountability is critical for the future growth of our party. It is for this reason that I have resigned as Congress President," the letter read.

"The party should decide on the new president quickly without further delay. I am nowhere in this process. I have already submitted my resignation and I am no longer the party president. CWC should convene a meeting at the earliest and decide," Gandhi told reporters in the parliament.

Rahul has also removed the tag of party President from his Twitter bio hours after confirming his resignation from the top post.

Gandhi, currently a Member of Lok Sabha from Wayanad in Kerala, became the Congress president in 2017.