‘This time NDA will definitely win, people of Vellore are intelligent, will not waste vote by casting their votes to DMK," Shanmugam said. 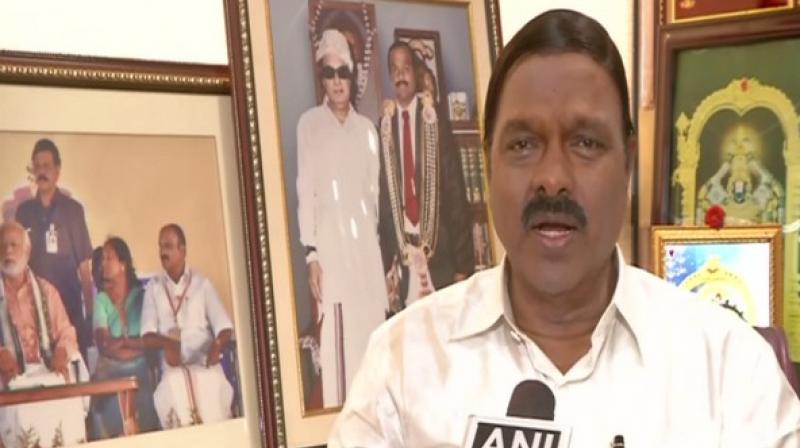 The notification for the August 5 election will be issued on July 11. The nomination process will begin the same day and the last date for filing papers is July 18. (Photo: ANI)

Chennai: “The voters of Vellore will choose the National Democratic Alliance (NDA) over the Dravida Munnetra Kazhagam (DMK) this time in the by-polls,” said NDA candidate from Vellore, AC Shanmugam, on Thursday.

"This time NDA alliance will definitely win, the people of Vellore are intelligent and will not waste their vote by casting their votes to the DMK," Shanmugam told ANI in Chennai.

Shanmugam is the founder of New Justice Party and was a former All India Anna Dravida Munnetra Kazhagam (AIADMK) leader.

He has been named the NDA candidate from Vellore constituency for the bye-elections to the Lok Sabha which is to be held on August 5.

Earlier today, the EC announced the date of the bye-polls and the time for filing nominations for the candidates.

The notification for the August 5 election will be issued on July 11. The nomination process will begin the same day and the last date for filing papers is July 18.

The results for the same will be declared on August 9.

"The Modi government will get an additional member in the Lok Sabha from Tamilnadu," Shanmugam said expressing confidence ahead of the bye-elections.

Voting in the Vellore parliamentary constituency in Tamil Nadu was rescinded by President Ram Nath Kovind on the recommendation of the EC on April 16 after a large amount of unaccounted cash was allegedly seized from a warehouse belonging to a DMK candidate in the state.

DMK and Congress-led United Progressive Alliance had managed to sweep the Lok Sabha elections held earlier this year in Tamil Nadu with the UPA managing to win 37 seats in the state.

AIADMK managed to win just one seat while BJP could not open its account in the elections.