MPs to vote for Vice President tomorrow; NDA's Venkaiah has the upper hand

The Vice President is the second highest constitutional post in India and is also the 'ex-officio' Chairperson of the Rajya Sabha. 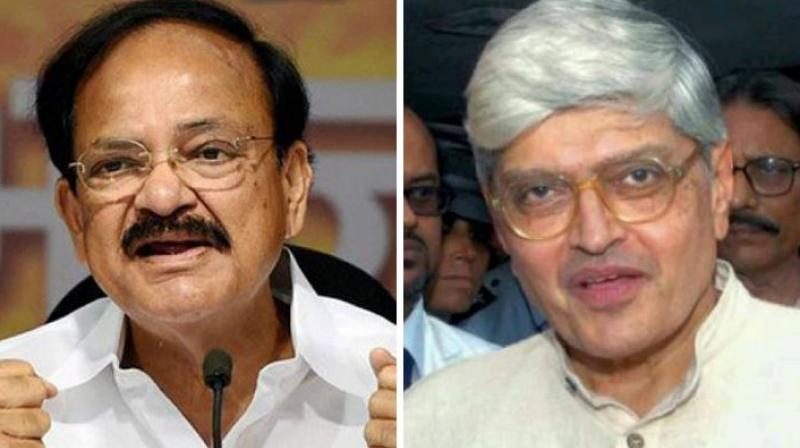 New Delhi: Days after getting the new President, the country is all set to witness the election of the 15th Vice President of India, scheduled to be held on Saturday. The result will be announced on the same day.

The National Democratic Alliance (NDA) has fielded former union minister M Venkaiah Naidu as its candidate for the post, while Opposition’s nominee is former governor of West Bengal Gopalkrishna Gandhi.

The new Vice President, when elected, will replace Hamid Ansari, who has held the vice presidential post for two consecutive terms. Ansari’s tenure will end on August 10.

The Vice President is the second highest constitutional post in India and is also the 'ex-officio' Chairperson of the Rajya Sabha.

How is the Vice President of India elected?

The process of election of the Vice President is quite similar to that of the President, but only members of both the Lok Sabha and Rajya Sabha get to vote in the election, while in the Presidential poll MLAs also have the voting right.

Members of Parliament will use special pens for marking their choice in the election to be held between 10 am and 5 pm on Saturday. Votes marked with any other pen are liable to be rejected. The ballot paper shall contain the names of the contesting candidates. There are no election symbol.

Counting of votes will commence soon after polling ends, and the result is expected to be declared by 7 pm.

The total strength of the two Houses is 790. But, two seats are vacant in the Lok Sabha and one in the Rajya Sabha, bringing down the total count to 787.

Of the two seats, one fell vacant when the BJP MP in Lok Sabha, Chhedi Paswan, was barred from casting vote following a judicial pronouncement.

There are few major differences between the election of the President and the Vice-President.

The winning candidate has to get 51 per cent of the total vote to become the Vice President of India.

NDA's candidate Venkaiah Naidu has an edge over his contender Gopalkrishna Gandhi as BJP has higher number of MPs in Lok Sabha.