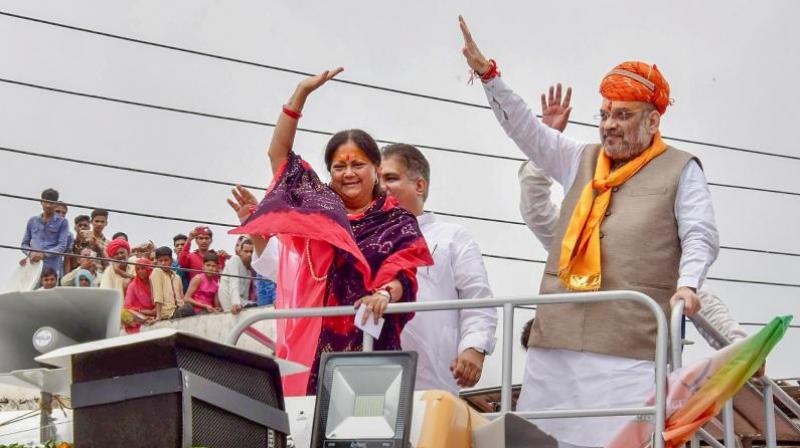 Jaipur: Sounding the poll bugle for the upcoming assembly elections in Rajasthan, BJP president Amit Shah on Saturday raised the issue of illegal migrants in Assam.

He challenged it to clear its stand on National Register of Citizens (NRC) in Assam besides making a blistering attack on Congress president Rahul Gandhi.

The BJP president was addressing a rally in Rajsamand after flagging off Chief Minister Vasundhara Raje’s “Rajasthan Gaurav Yatra” Charbhuja temple on Saturday.

Using the NRC issue as a pitch to corner the Congress, Shah called on people to question the Congress president Rahul Gandhi as to why he wants “Bangladeshi intruders” in the country.

“Rahul Baba will come here later this month, you must ask him why he wants to keep Bangladesh intruders in the country.  The Congress wants them to stay here because they are its vote bank,” he said.

Almost 40 lakh people , mostly Muslims, have been excluded from the NRC list in Assam. According to Shah, the Congress wants to save them for sake of their votes.

The BJP president dispalyed a hostile mood against the Congress president who has been constantly slamming the prime minister over his promise of ‘achche din’ and ‘sabka saath, sabka vikas’.

Shah rapped the Congress chief for asking what the Modi government had done in four years. Instead, Shah said that the people of India have been demanding answers for four decades.

Taking a dig at Rahul's Italian roots, he said, “Rahul Baba, I do not know Italian otherwise I would have told you how much we have done for the people.”

The BJP president said that Modi government started 116 schemes for poor people and the Raje government has executed these schemes on the ground.

He added that only a BJP chief minister can have the courage to go on a yatra to give people a report card of the government’s performance.

He said Congress did nothing when it was in power for five decades.  It was Vasundhara Raje who brought the state out of ‘BIMARU’ category.

Earlier, Chief Minister Vasundhara Raje asked people to stop voting out the party in power if they want development to continue.

“If you want development, then change the trend of changing government every five years,” she said.

The chief minister said that the Congress has only looted the country and divided people to rule. She said that the BJP has left nothing to spare for the development of the state and wanted to keep the momentum going.

As a prelude to polls in December, Raje on Saturday set off on more than a 6,000 km road trip that will cover 195 assembly constituencies the next 40 days. Prime Minister Narendra Modi will address the concluding rally in Pushkar.