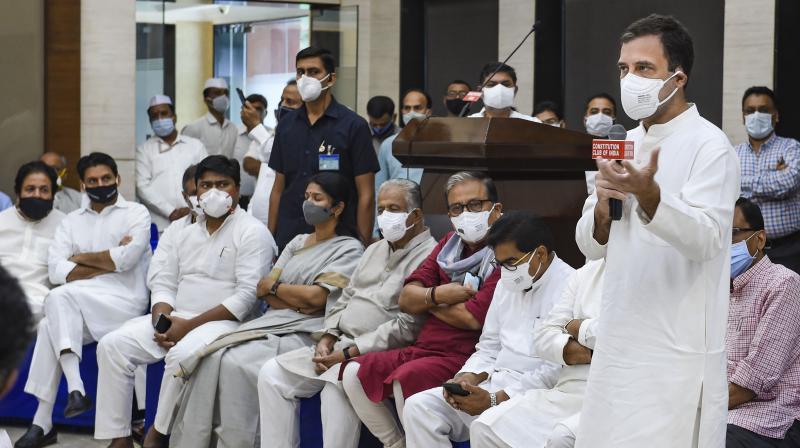 New Delhi: Congress leader Rahul Gandhi on Tuesday appealed to the leaders of 14 other Opposition parties to unite and take on the Central government on the Pegasus spyware controversy. He was speaking at a breakfast meet of the Opposition parties called by the Congress at the Constitution Club here.

Mr Gandhi said: “The single most important thing in my view is that we unite this force. The more this voice (of the people) unites, the more powerful this voice will become, the more difficult it will become for the BJP-RSS to suppress it.”

After the meeting, Mr Gandhi along with several Opposition MPs cycled to Parliament House as a mark of protest against the steep hikes in fuel prices recently.

Earlier, he had surprised everybody by riding a tractor to Parliament to highlight the controversial farm laws. The leaders of 15 parties, including the Trinamul Congress, which had been absent at the last such meeting, were present at Tuesday’s gathering. The Aam Aadmi Party and the Bahujan Samaj Party were, however, not present.

Hours after the bicycle ride, Mr Gandhi tweeted in Hindi: “Our face or name is not needed. All that’s important is that we’re representing the people. In every face are crores of faces who are fed up with inflation.”

He also used Prime Minister Narendra Modi’s poll promise of “Achche Din” (better days) to hit back at him with a taunt: “Yehi hain achche din” (These are the good days)! In another tweet on the Opposition meeting, he said: “One priority -- our country, our people.”

The Opposition parties have been demanding a court-monitored probe into the allegations about surveillance through the Pegasus spyware controversy. The government has denied the Opposition’s allegations.

The Opposition parties had met last week to put forth their demands on the issue, where Rahul Gandhi was also present. The Opposition leaders later jointly addressed the media. Mr Gandhi has been active over the Pegasus issue and his “breakfast politics” is also seen as an exercise by the Congress leader to emerge as the Opposition’s face. Interestingly, Mr Gandhi is one of the political leaders who were identified as a possible subject of hacking by the international consortium of investigative journalists who broke the story about the Pegasus spyware being used for snooping on politicians, journalists, activists and even constitutional authorities.

Both Houses of Parliament saw several adjournments on Tuesday, with members of the Opposition demanding that their adjournment motion should be allowed, and a discussion should start on the Pegasus spyware controversy. The Congress along with several other Opposition parties, have been critical of the government for passing certain bills in the din. The Monsoon Session of Parliament, that began on July 19, is due to end on August 13.