The 1979 Kerala cadre officer said that the BJP had never said that beef cannot be eaten. 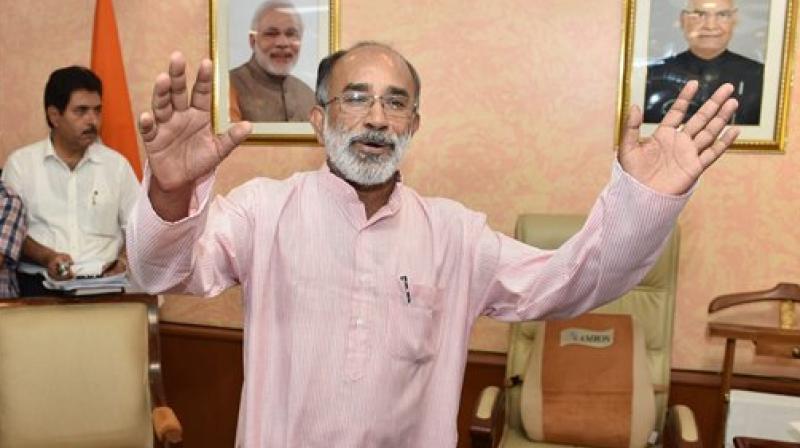 Alphons Kannanthanam, the new Minister of State (Independent charge) for Tourism talking to media as he take over charge of his office in New Delhi. (Photo: PTI)

New Delhi: On the first day in his new office as tourism minister, bureaucrat-turned-politician Alphons Kannanthanam touched upon the controversial issue of beef, saying it would continue to be consumed in Kerala.

The 1979 Kerala cadre officer said that the BJP had never said that beef cannot be eaten.

"The BJP does not mandate that beef cannot be eaten. We don't dictate food habits in any place. It is for the people to decide," he said.

Kannanthanam said if a BJP-ruled state like Goa was eating beef, there should be no problem in Kerela.

He later told a TV channel that he would act as a bridge between the Christian community and the BJP.

Addressing some of the concerns that were raised by the Christian community about the BJP in the past, Kannanthanam said it was mere propaganda.

"There was a lot of propaganda in 2014, that if Modi comes to power Christians will be burnt, churches will be demolished. The prime minister has made it clear that believe whatever you want, I will protect you. The PM has done a fantastic job in taking everyone along," he said.

Parrikar, in July, had said in the Assembly that he would ensure that there was no shortage of beef in the state and, if required, it would be imported from neighbouring states.

Cow slaughter is banned in as many as 21 states.

Consumption of beef has also been barred in some of these states, including Chhattisgarh, Haryana, Jammu and Kashmir, Jharkhand, Maharashtra and Uttar Pradesh. It is also banned in the Union Territory of Chandigarh.

Kerala is among eight states where there are no restrictions on cow slaughter.

However, widespread protests and "beef fests" were organised in Kerala in May following a central government notification banning sale and purchase of cattle from animal markets for slaughter.

The Madurai bench of the Madras High Court has stayed the Centre's notification on cattle slaughter ban, while the Kerala High Court refused to order a stay on it.

The Supreme Court later clarified that Madras High Court's stay on the notification is operational, implying that the stay on cattle slaughter ban is effective across the country.